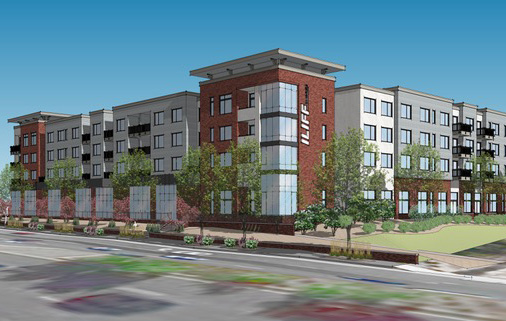 A rendering of the mixed-use project planned near the light rail station on Iliff Avenue. (Grand Peaks)

A Denver-based real estate firm plans to build a mixed-use development next to a light rail stop in Aurora.

Grand Peaks paid $3.9 million last week for 5.2 acres at the Iliff Avenue exit off Interstate 225, according to property records. The site is currently clear.

The seller was Fashion Bar Associates LLC. John Winsted of JW Cos. represented the buyer.

Grand Peaks plans to build two four-story buildings connected by an elevated pedestrian walkway. The complex will have 316 apartment units, 12,500 square feet of retail space and a parking garage. Amenities will include a pet spa, fitness center and roof lounge.

The site is adjacent to Iliff Station, on the Regional Transportation District’s H and R lines.

Grand Peaks has properties in Colorado, Florida, Washington, Oregon and Texas, according to its website.

The company already has a foothold in Aurora. The first residents moved into Ridge At Wheatland Apartments at 6855 S. Langdale St. in August.

A rendering of the mixed-use project planned near the light rail station on Iliff Avenue. (Grand Peaks)