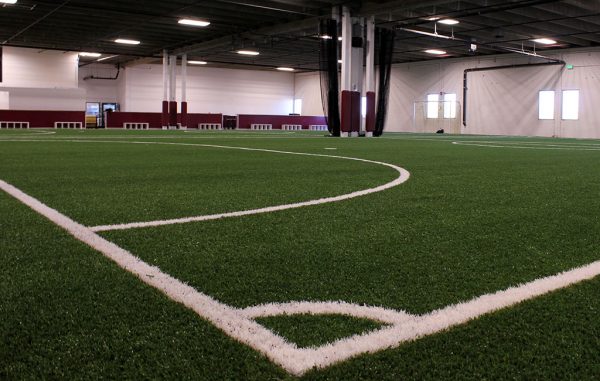 The Eddy, as the project is named, was built to help players ages 3 to 18 improve footwork and overall skills.

Director Aaron Nagel said now players can keep up with their training year-round. He said much of the cost would be earned back without paying for external locations for winter programming that can run in the Eddy.

“All of where we put our kids, all the fees are going up,” he said. “I don’t think they understand that the impact that has trickles down to families actually having access to these sports.”

The organization received a grant from the U.S. Soccer Foundation for the new turf. Unlike standard turf, Nagel said, the facility used new rubber not made from recycled tires. The organization also applied for a grant with the Colorado Soccer Association.

The building was previously a 120,000-square-foot call center. It is now divided into three different commercial spaces. One space is still for lease, the other is occupied by the Concorde Career Institute. 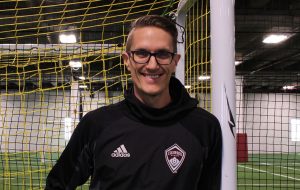 Formerly, the CRYSC was housed at 1001 S. Monaco Parkway in Denver. The nonprofit has moved its 21 staff members to Havana Street.

“A lot of us grew up playing soccer and are very passionate about what the game did for us,” he said. “It’s a sport, but it’s not the end-all-be-all on the field because there’s the social aspect of it, there’s a self-recognition aspect of it, who you are as a person, all that sort of stuff that we feel is important to childhood development.”

The nonprofit was founded as the Colorado Fusion Soccer Club. In 2009 it joined the Colorado Rapids Adidas Alliance, which connects youth leagues statewide to resources from the professional team. This led to the nonprofit’s rebranding as the CRYSC in 2012.

In fiscal year 2015, the club brought in nearly $3.5 million in revenue. More than $2.8 million came from programming.

An organization tied to the Colorado Rapids has opened a new facility with four turf fields, training space and classrooms.

Billionaire owner at the top gets grants to fund an indoor facility? The article is not clear whether the million invested includes the grant money or not? The Rapids have to get a lot better at identifying and developing talent in Colorado. They are not the market leaders and how much of that referenced revenue supports the owner?