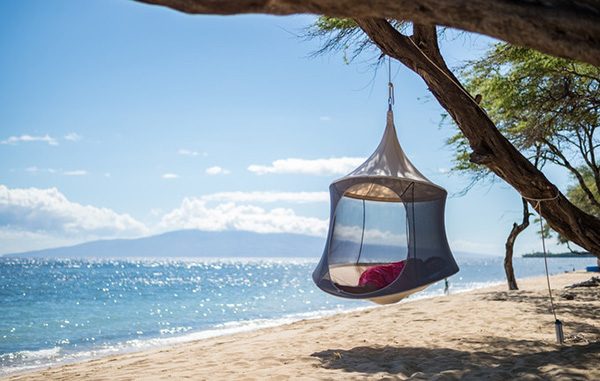 CEO Ricardo Bottome said the funds will go toward manufacturing in China, and he’s aiming toward the outdoor-enthusiast market and businesses wanting more creative office furniture.

“We also think it hits a patio furniture market, which is new for us,” Bottome said. “We’re starting to look at trade shows to sell those products.”

This is the second iteration of TreePod products, as Canaima also released suspended tree houses for children last year, selling 10,000 TreePods. At 6 feet in diameter and able to carry up to 500 pounds, the newest models have neutral colors, bigger doors and bigger rings to suspend from trees, Bottome said.

“The colors are much more friendly to an adult and much more to a house,” he said. “It’s also easier to assemble (and) a better price point. We think it hints at a much wider audience than the first one.”

After moving back to Boulder from Louisville this year, Canaima is diversifying its products to involve more than just slacklines. Bottome said sales are split 50/50 between slacklines and the suspended tree houses.

“With these new (TreePods), that will probably change quickly,” he said. “The slackline business has matured. It’s not growing as fast as it was three or four years ago.”

TreePods retail for $250, according to the Kickstarter page, and will be delivered in November. While the previous TreePod is sold at REI, Bottome said, the most recent product has a distributor in South Korea while he works to get into large distributors – including REI – in the U.S.

A Boulder-based outdoors firm earned $90,000 through a Kickstarter campaign for its latest hanging tent - big enough for adults.