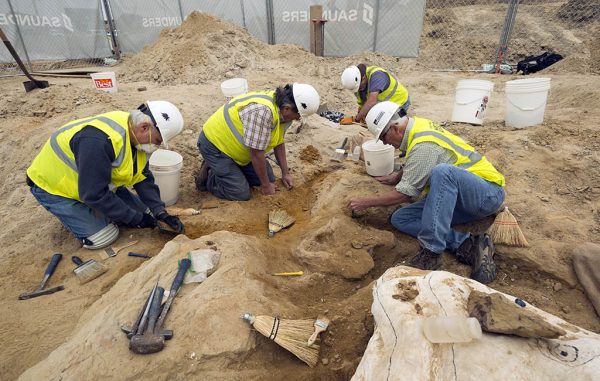 Crews work to uncover the triceratops bones on Sept. 6. (DMNS)

Construction crews can get back to work this week on a new public works building in Thornton after a 66 million-year-old dinosaur was exhumed from the dirt.

On Tuesday the Denver Museum of Nature and Science announced that its team finished excavation of the triceratops fossil.

The bones, first discovered last month, create the most complete fossil ever found in Colorado.

A release from DMNS said 80 percent of the triceratops skull was recovered, as well as 15 percent of the skeleton. A 40-pound rib bone was the first to be pulled from construction site.

Bones from the triceratops were covered in a plaster mold before being taken to the museum. DMNS will begin researching the bones at its lab.

On Aug. 25, construction workers at the site unearthed what was later determined to be a horn and shoulder blade of the three-horned dinosaur, led by Joe Sertich, the museum’s dinosaur curator. On Monday morning, the crew found part of a backbone nearly 15 feet away from the original find.

The 66 million-year-old fossil joins a collection of artifacts owned by the state of Colorado. 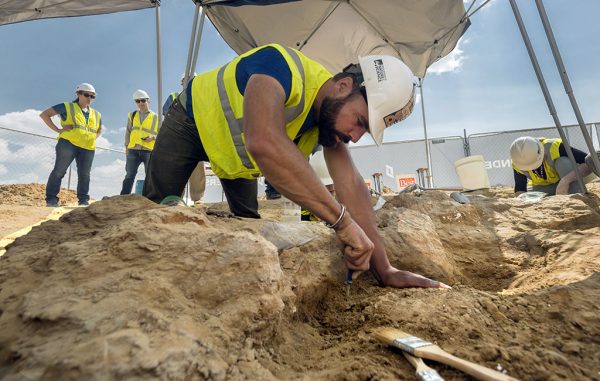 Crews work to uncover the triceratops bones on Sept. 6. (DMNS)

Construction crews can get back to work this week on a new public works building after a 66 million-year-old dinosaur was exhumed from the dirt.