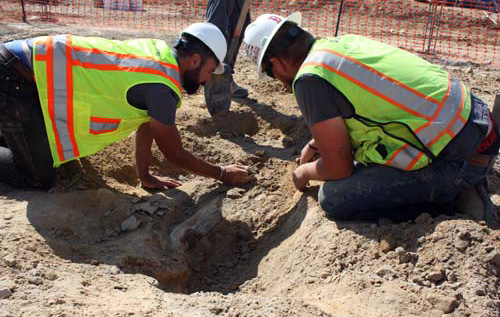 The state of Colorado scooped up some cretaceous swag this week: a 66 million-year-old triceratops fossil.

The horns and shoulders of one of pop culture’s favorite dinosaurs, discovered on a construction site owned by the city of Thornton on Aug. 25, is property of the state thanks to a 1973 law that says archaeological finds found on city and state land are Colorado’s for the keeping.

Chris Johnston, an assistant archaeologist with the state, said Colorado typically leaves museums such as DMNS to excavate and display fossils. Sometimes they end up at local museums near the dig.

“We prefer as best we can to hold archaeologic specimens as close to where they were found as we can,” he said.

Construction workers were moving dirt for a new public safety building at Quebec Street and 132nd Avenue in Thornton this week when they uncovered the fossilized bones.

Joe Sertich, dinosaur curator at the DMNS, confirmed the find onsite this week. He said excavation crews in Colorado stumble across smaller fossils with some frequency, but might overlook them.

“It really takes a keen eye,” Sertich said. “Something tiny could turn into a really big discovery.”

Sertich said a team from the DMNS started excavating the 10- by 15-foot area yesterday and will ask permission to expand the dig if there is evidence of more fossils nearby.

Sertich hopes to finish the dig within weeks. The triceratops is in soft rock, making it easier to recover than the sometimes years-long process of removing a fossil found in hard rock in one piece.

The fossils will debut publicly as soon as Friday, he said, since museum visitors can see museum employees prepping fossils through a window into the DMNS lab.

“There are ample opportunities to get close to these fossils,” Serich said.

Triceratops are a fixture of dinosaur blockbusters and cartoons most recognizable for having two horns above their eyes and a third on the nose. At press time, the DMNS had recovered two horns, a rib and a scapula bone at the site in Thornton.

The species is a Colorado native. The earliest documented triceratops horns were discovered near the present-day home of REI in 1889. Another triceratops fossil turned up during the construction of Coors Field and inspired Rockies mascot Dinger.

The fossil is one of three full triceratops skulls found on the Front Range, according to a press release from the city of Thornton.

The last skull turned up in 2003, when a portion of a 7-foot fossil was recovered from a Lennar Corp. site in Brighton. The Greeley Tribune reported that the DMNS did not have the authority to halt the homebuilder and excavate in the midst of construction. Lennar later donated the 400-pound scull to DMNS, where it is on display.

The horns and shoulders of a triceratops, discovered on a construction site owned by the city, is property of the state thanks to a 1973 law that says archaeological finds found on public land are Colorado’s for the keeping.