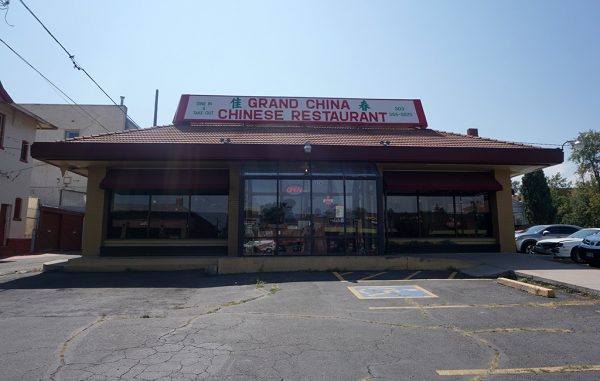 The lot at the intersection of Gaylord Street and Colfax Avenue was listed in early September. (Lynn Yen)

“Every piece of property has been redeveloped or in the process of being developed,” listing agent John Livaditis of Axio Commercial Real Estate said about the stretch of Colfax near East High School.

The lot, one-third of an acre, is at the intersection of Gaylord Street and Colfax Avenue and hit the market in early September. Livaditis said the price is negotiable but will land around $1.5 million.

Next door to the east, the former Co-op Vape shop is vacant and was listed for rent in early summer by Unique Properties for $4,000 per month. At the other end of the block on York Street, the former Abend Gallery was bought in May for $1.15 million by St. Charles Town Co. and is being redeveloped.

“Colfax is going through a resurgence,” Livaditis said.

The property at 2200 E. Colfax Ave. currently houses the Grand China restaurant, but is being marketed to other restaurants and developers alike. The land is zoned for five stories of mixed use. Livaditis said the restaurant will close once the land is sold.

The property owner, Ho Khoan, bought the building in 2005 for $650,000, according to property records. He is selling it now to take advantage of the market, Livaditis said.

Across York Street, a former Arby’s has been listed for sale by NAI Shames Makovsky for a couple years. The half-acre lot, zoned for five stories, also is being marketed to retail and mixed-use developers.

The lot at the intersection of Gaylord Street and Colfax Avenue was listed in early September. (Lynn Yen)