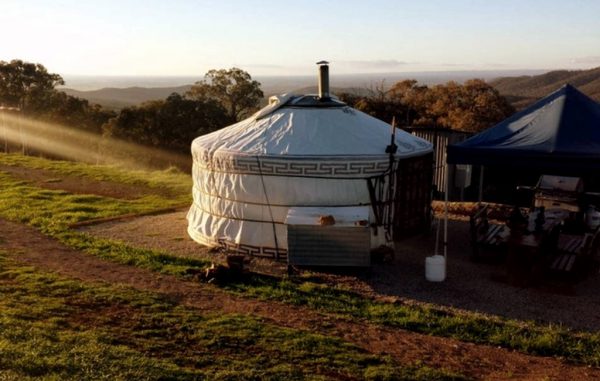 The event will host owners of glamping venues, like yurts, huts and cabins. (Glamping Hub)

Ruben Martinez encourages travelers to book a night’s stay in safari tents and treehouses through GlampingHub.com, the booking site for unusual accommodations he helps run from Denver. But to host the first U.S. gathering of international glampers, he chose a more traditional option: a Stapleton hotel.

The Global Glamping Summit debuts next April in Denver. Martinez, head of the U.S. office for booking site Glamping Hub, is hosting a two-day event at the Renaissance Denver Stapleton Hotel from April 24 to 25. He’s expecting 500 current or prospective owners of glamping venues —also known as “glamor camping”— to attend, exhibit and network.

“This will be the first one within the U.S,” Martinez said. “But 30 percent (of attendees) will be coming from abroad … They want to get into the glamping game within the U.S.”

Martinez said Glamping Hub, which takes a percentage from the sale of bookings, has grown to 20 employees and moved into Creative511 Workspace, a coworking space near the corner of Broadway and Speer Boulevard.

Martinez helped start Glamping Hub in 2012 in Seville, Spain, where the company currently employs 84. He opened his first U.S. office in April, and had four employees in July. The site handles bookings and listings for property owners and guests staying in unique accommodations in the outdoors – from tree houses to yurts to huts. 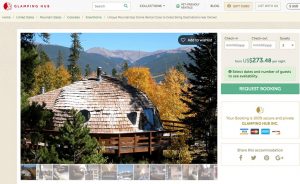 A Glamping Hub listing in Colorado.

Although glamping is better known in Europe and other international markets, Martinez said 75 percent of his business comes from the U.S. Plus, he’s convinced Denver is the place for an international gathering of cabin, hut and yurt owners.

“We find a lot of operators here in Colorado don’t just want to stay at a cabin,” Martinez said, adding Colorado vacationers are looking for places with access to activities like skiing, mountain biking or whitewater rafting. For U.K. glamping owners, that’s a foreign concept.

“(That) people will go on vacation and do all these activities on top of staying blows their minds,” Martinez said. “They are trying to figure out a way to replicate what Colorado does in their market.”

Colorado companies such as Outdoors Geek, which rents out glamping gear, have committed to attending the Glamping Global Summit, Martinez said. According to the event website, exhibitor costs are $2,000.

By year three, Martinez expects as many as 5,000 attendees at the Global Glamping Summit, based on the growth of the similar U.K. Glamping Show, now in its sixth year.

And Glamping Hub’s site continues to grow along with the glamping trend in the states, from 8,000 property listings in April to 15,000 listings in September. Martinez is projecting to have 40,000 listings by May. His hottest markets: California, New York, Texas and Colorado.

“There are more and more people who have a piece of land or they want to be able to invest in something that is different and unique,” Martinez said. “The startup cost is minimal.”

It’s appealing for guests as well.

“If they’re in Denver and they want to get out, they love telling people they’ve done something different and unique. They stay in a safari tent and they tell everyone on Instagram and Facebook.”

The event will host owners of glamping venues, like yurts, huts and cabins. (Glamping Hub)