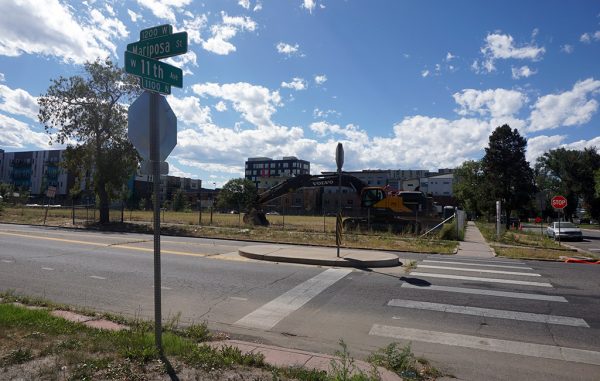 The first puzzle piece of a planned 58-unit townhome project in Lincoln Park has fallen into place.

The vacant site, which Koelbel purchased from the Denver Housing Authority, is the first of two pieces of land Koelbel has been planning to buy from DHA. Koelbel senior vice president Peter Benson said this parcel will hold 40 of nearly 60 for-sale townhomes.

“It’s a great location,” he said. “We’re a block from the light rail station at 10th and Osage and there’s a lot going on” within walking distance.

Koelbel is calling the project CityHomes at Lincoln Park. Benson said the townhomes, designed by architecture firm EVstudio, will stand three stories tall, with two or three bedrooms apiece and a rooftop deck on each one.

Koelbel is going out to bid on subcontractors. It plans to start construction before the end of the year and have the first buyers moving in by next summer.

As for price, Benson said the developers are looking to sell market rate townhomes in the $400,000s.

Figures could change based on 2018 AMI, a federal calculation that uses census data.

Koelbel Urban Homes is also looking to buy a second parcel covering roughly the southwest corner of a parcel at Navajo Street and W. Ninth Avenue, Benson said, where the company would build the remaining 18 townhomes it has planned.

Outside of Lincoln Park, Koelbel has been active around town with a 14-unit townhome project in Cheesman Park and a 29-unit row home development in Lowry’s Boulevard One.

The first puzzle piece of the planned 58-unit CityHomes at Lincoln Park has fallen into place.