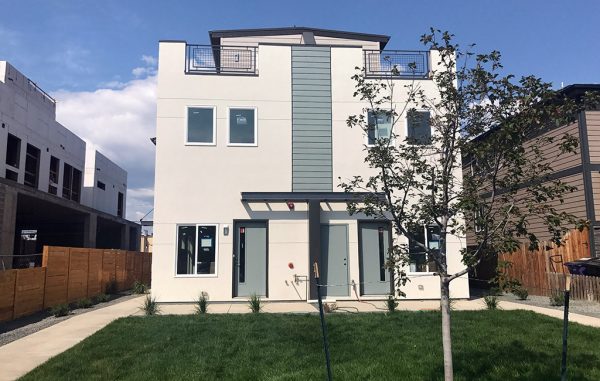 Four condos at 1531-1537 Vrain St. are being listed as a package for investors. (Courtesy Joe Manzanares)

As construction wraps up on a four-unit Sloan’s Lake townhome project, its real estate agent is testing the waters on selling the entire project at once – the second time this summer for that strategy in North Denver.

Real estate agent Joe Manzanares, owner of The Devonshire Co., listed all the condos at 1531-1537 Vrain St. for $1.8 million last week as commercial investments to see if there were nibbles.

He hopes to fill the demand for 1031 exchange properties, which allow investors to bypass capital gains taxes by using the revenue from selling one investment to purchase another investment.

By his count, there are three 1031 properties currently on the market in Denver. Manzanares attributes the lack of listings to the lucrative rental market.

“Rents are so good right now,” he said. “There isn’t a real reason to sell.”

Either way, if the condos sell together or individually, the revenue will be the same for the developers, the Denver Development Group.

“If it doesn’t work that’s okay,” Manzanares said. “Either way they are going to sell.”

Once construction is completed next week, the condos also will be listed for individual purchase in the residential real estate market. Even if one unit sells, the remaining three can be purchased together as investment properties.

There are two units measuring 1,137 square feet with two bedrooms, three baths and a one-car garage that will be listed individually for $430,000.

The other two units are 1,237 square feet with three bedrooms, three baths and a one-car garage that will cost $450,000 each.

Named the Vrain Rowhomes, the building was constructed by Keith Gallegos and designed by KSA Architecture.

According to property records, Denver Development Group bought the former dirt lot in January for $350,000 from Leon Cisneros, who owns the nearby Sloan’s Lake Flats. The group consists of Manzanares’s wife Kathleen Manzanares, Keith Gallegos, Diedra Garcia and Art Valasquez. The group has worked together previously, self-funding their projects.

Four condos at 1531-1537 Vrain St. are being listed as a package for investors. (Courtesy Joe Manzanares)

As construction wraps up on a Sloan’s Lake townhome project, its real estate agent is testing the waters on selling it all at once - the second time this summer for that strategy in North Denver.