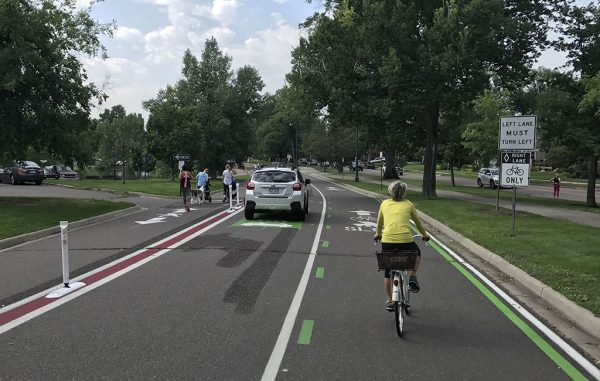 David Matthews has been walking and pedaling the 2.2-mile circle around Wash Park for 45 years.

But this summer, a new addition to the route threw him for a loop. Seemingly overnight, a third lane appeared beside the familiar pedestrian and bicycle alleys: the fast lane.

“You’d think there was a race track out there,” said Matthews, a board member of the West Washington Park Neighborhood Association.

It’s not just the fast lane that’s new. As of the end July, the city has painted 150 new stencils on the asphalt path, installed 100 vertical signs explaining the new layout and erected a series of barriers to block cars from turning onto the loop.

Jason Himick is the senior park project manager for Denver Parks and Recreation overseeing the new signage and stencils. He said the city has been fielding resident comments about Loop Road for more than a decade. In 2015, the parks department published a 100-page report outlining its plans for updating it.

“We heard from the community that they wanted safety concerns addressed on the Loop Road, and this was our response to that,” Himick said. “It’s not something that Parks invented.”

The end product is a three-lane system. The two outer lanes are for one-way wheeled traffic only, each marked by a bicycle and a rollerblade stencil. The outermost lane is slower; the middle lane is for passing. In at least one stretch, the middle lane opens up to car traffic, too.

The pedestrian lane, closest to the park interior, has a pedestrian symbol and is reserved for foot traffic and leashed dogs walking in both directions. 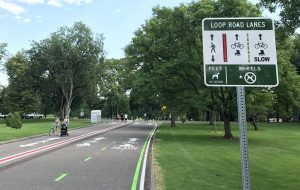 Work on the park began June 19 and finished July 31. Stream Design and Alta Planning + Design designed the lanes and Goodland Construction was the general contractor.

“There is nothing like this in the country,” he said. “We’d like people to give it a chance.”

Matthews, the neighborhood association board member, hasn’t come around yet.

He became an active member of the city’s study of the Loop Road after breaking an arm in a bicycle collision on it. He’s since bought a radar gun to check speeds in the park.

Matthews said the new lane squeezes pedestrians to one side.

“It was a complete surprise. The whole metro area has 10-foot bike paths for two-way traffic. Now, all of a sudden, they say 18 feet are needed.”

But he’s not Loop Road’s only critic.

“I think you need a road map to get through here,” one park goer said Thursday morning. “People were very confused by having two lanes. Now we have three lanes, and people are even more confused.” 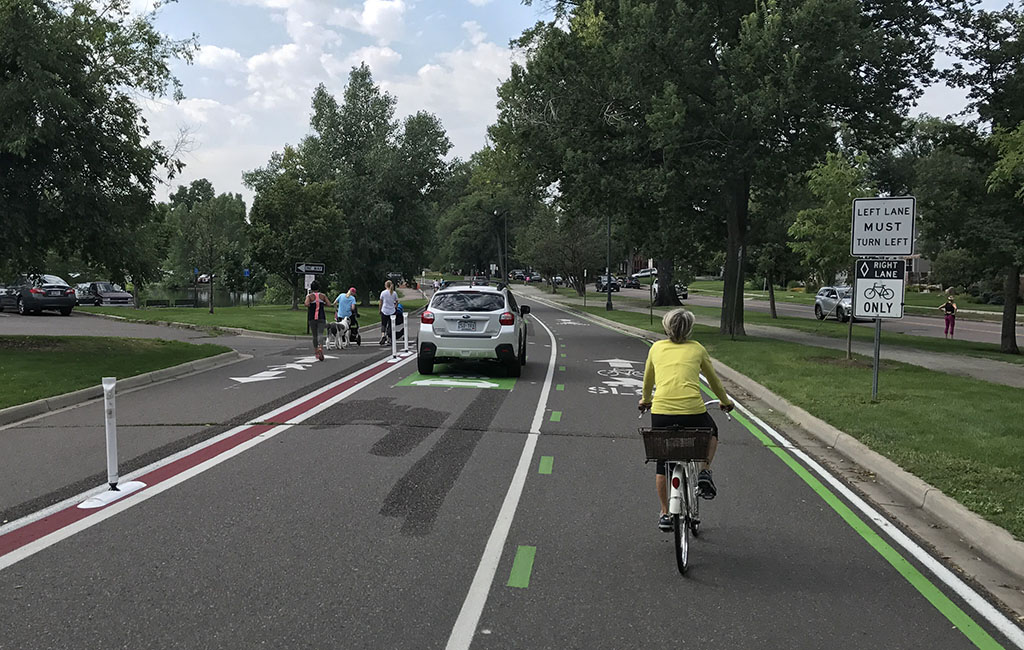 This in nutz! Most people go to the park to walk & relax! Who wants to have this figure this out! Throw a random tourist in the loop & it’s an accident waiting to happen. And what determines what’s fast & what’s slow? Too much thinking – ridiculous!

I love it. I ride my bike here often, and this is a major safety improvement. I hope success here extends to change in other parks and areas of the city as well.

I walk and cycle on Loop Road. Safer is definitely better. Can’t wait to check it out. $220k well spent.

Talk about overkill. Did Denver Parks hire someone who is OCD? I’ve never seen such ridiculous nanny state intervention. Did he forget the lines for where to stand for the port-a-john? What a waste of taxpayer dollars. Bikers, how about simply slowing down? It’s a park, not your time trial velodrome.

All in all, I understand the safety concerns here but there’s so much colored markings and “rules” to follow that it really takes away form the leisurely atmosphere of what a park is supposed to be.