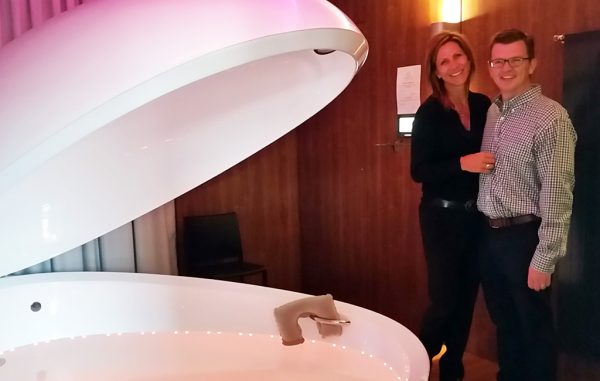 Forget high-intensity interval training: the couple behind Denver’s Orange Theory gyms is floating into something a little more relaxing.

Erik and Wendy Skaalerud, the area developers for Colorado’s 24 Orange Theory locations, are opening Inngi Float in Highlands Ranch in September. The location at 9567 S. University Blvd., just six doors down from their first Orange Theory, will feature pods filled with a saline solution where customers float in a dark, tranquil environment.

“Our goal really when we started was to have an umbrella company that could support multiple concepts in health,” Wendy, 46, said. “We have been open to looking at different concepts, and floating fell into our lap.”

Inngi Float, which comes from the Norwegian word for “inspire,” is a 3,000-square-foot space with four private enclosed pods big enough to hold 300 gallons of water, plus a separate tank that remains open and can hold 500 gallons of water. Customers can enjoy the center’s heated bathroom floors before entering the private pods.

The pods and pool are filled with a 30 percent saline solution made from a pharmaceutical grade magnesium sulfate, which contains minerals that the body naturally absorbs, the Skaaleruds said.

“The key to the salt is really finding the ratio that most supports the alignment of the body,” Wendy said.

The Skaaleruds attest to the mental and physical health benefits of floating, saying the practice helps fight depression, aging, inflammation and chronic pain. They said many professional athletes use the technique to recover from workouts or injury, while one hour of floating equals three to four hours of sleep in terms of recovery.

“Floating should be part of your daily regimen, almost like a workout,” Erik, 47, said.

The Skaaleruds hired McPherson Architecture and Far North Construction for the buildout of their space, and they’ve hired six employees. 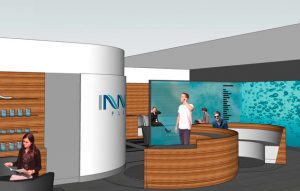 Rendering of the spa lobby.

The Skaaleruds, along with their partners Trent and Paig Peaker, opened their first Orange Theory in Colorado six years ago. The Skaaleruds have franchised five locations for the high intensity cardio and weight lifting group workout studios, and are getting ready to open two more. By the end of the year, Colorado will have 28 Orange Theory fitness studios, the couple said.

About 18 months ago, the Skaaleruds started dreaming about their next health business. They visited a friend in Texas who had a float studio, and they were immediately hooked.

“We both got out of the float tank knowing it was the direction we wanted to go,” Wendy said. “It’s not really mainstream yet and accessible to the masses.”

While the metro area is home to other float centers, including RiNo’s Samana Float Center and South Pearl’s Easy Float, the Skaaleruds say their filtration system sets Inngi apart. After each customer, the water drains from the tubs and goes through a seven-step filtration process before being recycled for the next person.

“The cleanliness of our pods is incredibly unique,” Erik said. “We are bringing the best filtration in the industry.”

A float costs $79 for an hour, and the business is also selling memberships.

The Skaaleruds plan on opening at least two other Inngi studios in the area within a year before taking the franchise out of state.

Forget high-intensity interval training: the couple behind Denver's Orange Theory gyms is floating into something a little more relaxing.