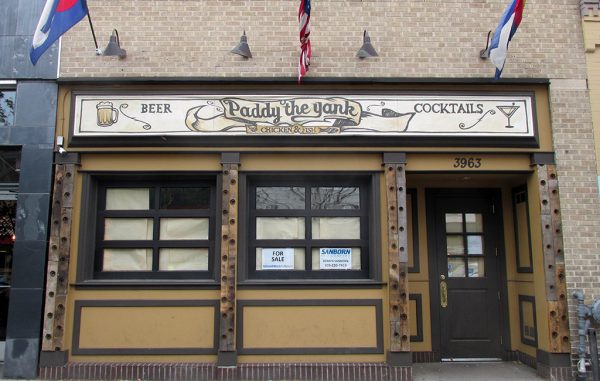 The former Paddy the Yank building on Tennyson Street was listed for $1M. (Lynn Yen)

Another Irish pub bites the dust.

Paddy the Yank on Tennyson Street joins Katie Mullen’s, McLoughlin’s and Fado as the latest Irish bar to close in Denver in the last two years.

The bar, owned and operated by Denver-based Little Pub Co., closed in May.

It previously went by Patrick Carroll’s before rebranding as Paddy the Yank in 2016.

The building at 3963 Tennyson St. is on the market for $1.2 million. The 2,870-square-foot building was built in 1961. The real estate was listed on Loopnet on June 19. Shawn Sanborn of Sanborn and Co. is the listing agent.

The owner of the building is Drake Real Estate Services, which recently sold a retail center in Stapleton for $10 million.

The Little Pub Co. owns more than 20 bars in the Denver area, including The British Bulldog, The Hound, Will Call and The Pioneer.

Paddy the Wanker closed over 2 months ago.
Where have you been?

And, it was never an “Irish” pub. It was just a little better than a dive bar. Selling Guinness does not make a pub Irish.
The food was terrible (not that I would let food poisoning from a burger bias my opinion).