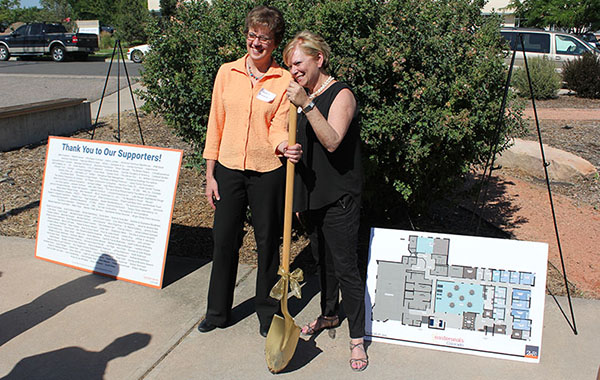 Jackie Brookshire (left) and Lynn Robinson (right) at the groundbreaking for Easterseals renovation on its building at 5755 W. Alameda Ave. in Lakewood. Construction for the $1 million project will start this fall. Photo by Kailyn Lamb.

Nearly two years after launching a $4 million capital campaign, a nonprofit has started renovating its Lakewood home and also purchased a nearby building to accommodate programs and staff.

The Colorado branch of Easterseals, a national nonprofit serving the disabled, hosted a groundbreaking Tuesday at its location at 5755 W. Alameda Ave.

Lynn Robinson, president and CEO of Easterseals, said the nonprofit has raised all but $250,000 in the $4 million campaign, which started in August 2015, and will spend $1 million of it to renovate the Alameda Avenue building. That will begin this fall and take six to eight months to complete. Mendel and Company Construction is the general contractor.

The 7,800-square-foot building has become too small for all of Easterseals’ staffers and programs, which focus on therapy and recovery programs for such diseases as polio and strokes, and also adult day care and employment services. It also has begun to offer programming for caregivers in Colorado.

Some staffers had offices in unconventional locations. “We have people working out of closets,” Robinson she said. “It’s hard to grow.”

Easterseals came to Colorado in 1926 with a goal of helping children that were stricken with polio.

In summer, when Easterseals runs multiple camps around the state, the organization has 500 staff members. That drops to between 375 and 400 in the winter. Robinson said Easterseals helped 13,000 people last year. 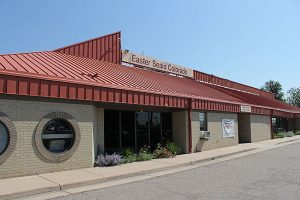 Easterseals will renovate its building on Alameda in Lakewood. Photo by Kailyn Lamb.

Easterseals also used campaign funds in a $3 million deal to purchase a nearby building at 393 S. Harlan St. last December.

The nonprofit will move some programming, such as stroke recovery, to the Harlan Street building in September. Easterseals will occupy 50 percent of the 26,000-square-foot building on Harlan Street. The company will lease out the rest, providing a new income stream.

“It’s hard to figure out how to do growth without putting the agency in debt for years to come,” Robinson said.

She said that 30 to 40 percent of the nonprofit’s budget comes from fundraising, and though clients’ Medicaid covers some program costs, it does not cover all expenses.

Jackie Brookshire (left) and Lynn Robinson (right) at the groundbreaking for Easterseals renovation on its building at 5755 W. Alameda Ave. in Lakewood. Construction for the $1 million project will start this fall. Photo by Kailyn Lamb.

The days of staffers working out of closets will end as the nonprofit nears completion of a $4 million capital campaign.

I support this non-profit growth… Because it helps people!
Instead of taking up room for apartments/condos/townhomes, which cost so much to live there, it adds to our homeless population.
Now this is worth putting your money towards! Way to go!