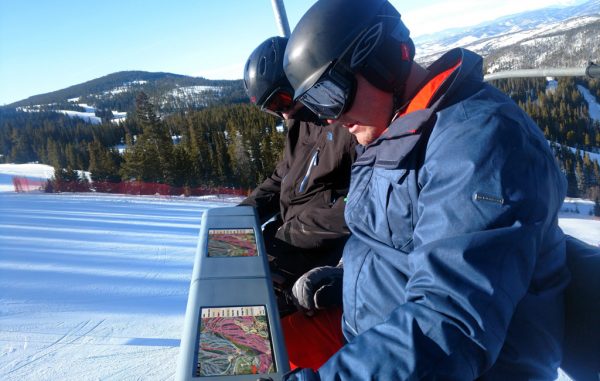 The company will test its chairlift screens this winter. (Alpine Media)

The lowly chairlift safety bar may be in for a digital upgrade if three Centennial entrepreneurs can bring their vision to ski mountains this winter.

“We’ve got some tooling that we’re working on and ramping up for the production for all these units,” Peyerl said. “It’s really a cost of all the engineering and final development of software engineering.”

The screens also are equipped with GPS to show chairlift riders their exact location. The panel rapidly charges every time it circles the bullwheel. Peyerl said Alpine will retrofit the lifts with a rail that charges screens through the back of the chairlifts or under the chairs.

The startup has signed agreements with Winter Park Resort and Wachusett Mountain Ski Area in Massachusetts for this coming ski season, Peyerl said. It plans to install up to 180 display screens – one for each seat – on Mary Jane’s six-person SuperGauge chairlift at Winter Park, as well as up to 120 displays at Wachusett. 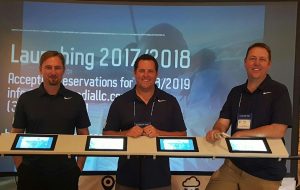 Winter Park agreed to take part in Alpine’s pilot program, spokesman Steve Hurlbert said, but it’s unclear whether the project will gain necessary approvals from the lift manufacturer, forest service and others to install the panels in time for this season.

Next year, Alpine plans hopes to install 4,000 to 6,000 displays at 10 resorts, Peyerl said. It has not yet signed contracts with advertisers, but is pitching to Meier Skis, Craig Hospital CDOT and Intrawest.

The displays are manufactured in Japan at Mitsubishi, and the panels are assembled in Colorado.

Peyerl, 40, said he and co-founders Gerrit VandeKemp and Jeffrey Connors first came up with the idea for Alpine Media on a ski trip at Winter Park. VandeKemp’s family had just installed digital signs near gas pumps in Montana, and after realizing that chairlifts have a similar captive audience, the group pursued creating digital advertising for chairlifts in March 2014.

Meanwhile, the group began reaching out to advertisers and personnel at ski resorts, including Intrawest.

Alpine hopes to turn profits from advertising or licensing to resorts. Peyerl said the pilot resorts are not paying for their products.

“The value they see in it is the enhanced engagement with guests,” he said.

The company will test its chairlift screens this winter. (Alpine Media)

The lowly chairlift safety bar may be in for a digital upgrade if three Centennial entrepreneurs can bring their vision to ski mountains this winter.

Thank god for this! It sucks having to spend time without being served advertising. I hate just sitting there, freezing, and not having media to stimulate me.

People who want or need a screen should stay at home. Why go skiing? I don’t buy any “safety info” as being a reason. We’ve made it until now. This is disgraceful. I feel sorry for kids who grow up with this in their life