About 2,800 Denver-area properties are listed for rent on Airbnb.

Denver landlords with investment properties on Airbnb are on borrowed time.

Six months after regulations banned the practice of renting investment properties for less than 30 days – a lucrative niche that could earn a landlord $1,000 to $2,000 more per month than a year-long lease – Denver is sniffing out the scofflaws and making suspicious Airbnb hosts prove with a driver’s license or other documents that they live there.

The city said it has five hearings scheduled starting next month, with more pending for the fall.

The local short-term rental ordinance also requires landlords to register for a business license and collect taxes. Denver has reaped $600,000 in revenue from those taxes in 2017.

The number of short-term rental listings fluctuates from month to month, according to data from Host Compliance, a California-based company hired by the city to analyze the local market. There were 1,000 more listings in December than the 2,800 listed now.

“At this point we can confidently say there are thousands fewer properties in Denver now,” said James Carlson, a consultant who works with short-term rental landlords and also owns a property.

Carlson said he rents a medium-term rental, and hauls in $1,000 to $2,000 less per month than he could with a short-term rental.

“It’s not Airbnb money, but it’s still more than long term,” he said. 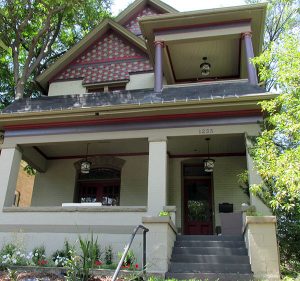 The house at 1235 N Clarkson St. in Capitol Hill is one of five properties being summoned to hearings to prove compliance with short term rental licenses. (Lynn Yen)

The city says more than 60 percent of the 2,808 short-term rental listings identified in the city as of June 19 had a license. But if the city suspects a landlord is listing a property they don’t live in, it requests proof of residence, like a vehicle registration, driver’s license, voter registration or tax document.

The city has audited 52 short-term rental licensees to confirm the property is the owner’s primary residence. Most of those were prompted by complaints, said Dan Rowland, a spokesman for the city’s department of excise and licenses.

Five landlords that have not provided proof of residency were summoned to hearings at the end of summer. A hearing officer will weigh their word against testimony from neighbors.

About 2,800 Denver-area properties are listed for rent on Airbnb.

Six months after regulations banned the practice of renting investment properties for less than 30 days, Denver is making suspicious Airbnb hosts prove with government documents that they live in the homes they rent.

This is just another example of government intrusion by Denver city government. Our City Council has done everything they can to control and tax whatever looks profitable..
Ordinary citizens are ignored while most of our
city councilpersons are taking large ‘donations’ from developers in order to grease the wheels for rezoning approval. Private property is a thing of the past.

Whether you are for or against STRs, taxes do need to be collected. For years hotels have collected lodging taxes that are now not being generated. Historically these taxes have been used, in part, to offset the cost impacts non-resident tourists / visitors have on the use of public infrastructure such as our water / sewer systems, transportation systems, sidewalks, etc. Believe me, I’m not a fan of excessive taxation, but it is in everyone’s best interest that these taxes be collected by all lodging establishments.

Well, hmmm. Let’s see. People have been subleasing their homes for decades using sites like Craigslist. Often times, without any need to involve city gov’t. People come and go, the rent gets paid, and everyone is happy. Until now. What’s the difference between where we’ve been and now? Airbnb is a magnet for people who want a predictable arrangement where there is a new sense of accountability. Neighbors who complain are most often busy-bodies with time on their hands, and are not adept to change.
With traditional shared housing arrangements, there are more problems than answers. Just ask anyone who’s tried it, and some of the horror stories that have evolved, from people not paying rent, landlords flaking out on repairs, tenants dealing drugs, etc. The city may think that it is somehow doing everyone a favor. The reality of it is that these folks have a ‘reason deficit’ in their thinking about Airbnb in Denver, and haven’t considered history as part of the mix. Of course, I can’t comment on what impact the hotel lobby or real estate developers in Denver have been trying to do to stop Airbnb from growing here. All of this is very predictable, of course, given other ideas that have evolved over time, including newer ideas such as Uber that have popped up that the status quo in many cities have tried to stop. Bottom line is that we need the Baby Boomers to move on and retire, pick up new hobbies to get them out of our lives, get money out of politics, and let people engage in fair trade for services in order to help grow our stagnant economy. If the members of the Denver City Council were smart, they would adopt a hands-off policy toward new ideas while monitoring the impact on the economy from a free market perspective, rather than from a control perspective. By and large, the only thing that this is hurting is the hotel industry, which has been ripe for disruption for many years. Same goes for traditional real estate. People also need flexible options when it comes to relocating here, and Airbnb is a great solution to help make that happen.

Once again the middle class gets stymied when trying to get ahead. This city’s (and country’s) tax laws are needs a major overhaul or half the country will move to Mexico. I am attempting to live on a meager retirement income and every option I have seems to be drying up. I would like to know who was bought off by the hotel industry.

Whats the difference between a hotel and an AirBnB? They both sell a place sleep, charged on a nightly basis. As someone who own an actual BnB – how am I supposed to compete when I have to follow all the rules and regulation, and price taxes into my rates?

Hey, I’m all for competition, but we must be on a level playing field. And if AirBnB’s don’t have to collect taxes or be certifed safe for occupancy, that puts me, and my 6 employees at a huge disadvantage.