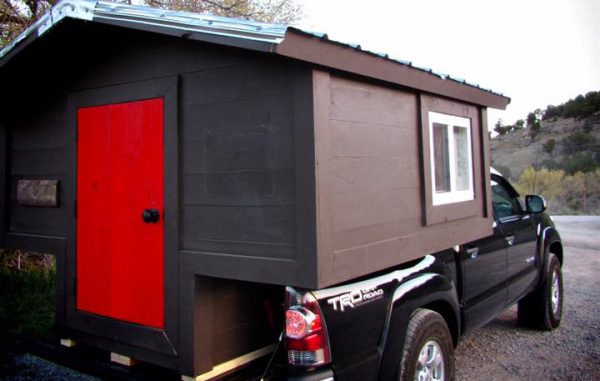 The $2,500 Sante Fe camper comes with a trailer, or can fit into the bed of a truck. (Hansen Adventure Works)

The honeymoon hasn’t even started yet for an engaged Wyoming couple, but they already have taken the road less traveled by building their own fleet of light campers.

The entrepreneurs have sold 42 in the last 18 months, and recently launched a new camper model to make any Coloradan drool: a one-person rig that can be towed behind a Subaru.

It all started when Hansen built his own camper for the couple to take on weekend excursions. Friends and family asked for ones for themselves.

“We didn’t actually know that it was a trend,” McCardell said. “People started coming up and talking to us … we started making them for friends and family to begin with. It’s easy to make these, and people enjoy them.” 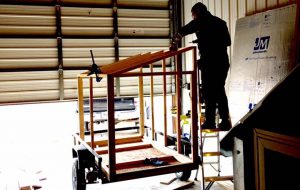 The campers take two to six weeks to build at a storage unit workshop in Laramie. (Hansen Adventure Works)

The startup has priced the units between $1,500 and $3,000. The campers come in three models: The $3,000 Horsetooth, a blueprint of Hansen’s first camper, is a 5-by-8-foot tiny home on wheels with a fold-out couch that turns into a bed. The $2,500 Sante Fe is made with pine siding that comes with a trailer, or can fit into the bed of a truck. The new $2,500 Armadillo is a one-person camper that’s 4 feet wide and 6 feet long.

The campers take between two and six weeks to build at a storage unit workshop in Laramie. Hansen, whose background is in construction and welding, builds the camper frames, and McCardell, a philosophy major, handles the interior design and marketing.

“He’s built things all his life,” McCardell said of her fiancé. “It’s something he’s put a lot of time and effort into and learned himself. We’ve had our trials and errors, but we’re pretty confident in building tiny homes for people.”

While the bare bones of the campers include a trailer, flooring, two siding windows and a single outlet, customers pay extra for additional appliances, including an induction stove or compost toilet for $150, or a heater for $300.

Hansen works as a surgical tech at a Fort Collins hospital, while McCardell is graduating next spring with a philosophy degree from the University of Wyoming.

The couple got engaged in November, but won’t get married until Hansen returns from a year-long deployment to Iraq with the U.S. Navy. After Hansen leaves in October, McCardell said, his brother will move to Laramie to take over the camper business in his absence.

The $2,500 Sante Fe camper comes with a trailer, or can fit into the bed of a truck. (Hansen Adventure Works)

The honeymoon hasn't even started yet for an engaged Wyoming couple, but they already have taken the road less traveled by building their own fleet of light campers.

sounds like a “TinyTruckHome”. cross between
slide-in truck camper and “TinyHome”.

This is my nephew and his fiancee. They do amazing work. So proud of you all!

I would definitely like to know how I can purchase one. They are totally awesome