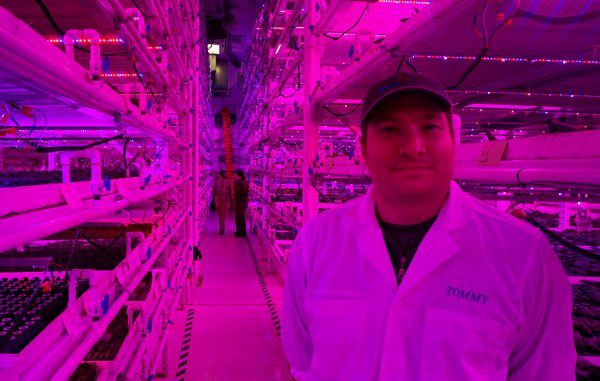 The origin of Tommy Romano’s startup sounds plucked from the pages of a sci-fi screenplay.

As an aerospace engineering master’s student at CU Boulder in 2002, Romano was working on a project for how to feed 200 humans on Mars for two years. The solution: hydroponics and vertical farming. The problem: a lack of humans on Mars.

“There is no one there yet,” Romano said. “Why aren’t we doing this down here?”

That’s when the plot veered from fantasy to reality.

The engineer-turned-farmer ran with his idea, writing his business plan for a vertical hydroponics farm in 2009. The next year, he launched his first operation out of a wind- and solar-powered shipping container in a field in Golden.

“That was the proof of concept that we used to raise our first capital raise in 2014,” Romano said. With those funds, Romano opened his first facility in Lakewood.

Now, Infinite Harvest has 18 employees and produces 100,000 heads of lettuce per month. And Romano raised $60,000, according to a March SEC filing.

“It’s all for getting this facility to increase its own production,” Romano said. “We’re not at 100 percent production yet.”

Romano, 45, uses peat as the medium and filtrated city water to grow his plants, which are stacked vertically and in columns on 10 tiers that are 16 feet high. In the 5,400-square-foot grow area, Romano can plant an acre’s worth of produce in one-tenth of the space, he said. Infinite Harvest controls the air and water temperature, light and other factors that create ideal growth environments.

Unlike aquaponics, Infinite Harvest does not use fish to fertilize plants, as it simplifies the system and lowers the risk of contamination, Romano said.

Even on Christmas Eve with 3 feet of snow outside, Infinite Harvest is planting.

“We grow every single month of the year,” Romano said. “It is farming on the manufacturing level.”

Romano plans to use the capital from his recent raise to buy more seeds, nutrients and greenhouse equipment to provide more leafy greens for Infinite Harvest’s main clients, Shamrock Foods and FreshPoint. Both distributors sell Romano’s produce to a variety of businesses in Denver, from casual joints like Tokyo Joe’s to fine-dining restaurants like Jax Fish House and Ocean Prime. Infinite Harvest also sells directly to a few local Denver businesses, including The Way Back, Serendipity Catering and Nooch Vegan Market.

Romano looks to hire two employees to keep up with the increase in production, and also is eyeing a bigger facility.

“We have a very solid confidence that we’ll be profitable this year,” Romano said.

“We stay with leafy greens because they are very easy to grow,” Romano said, adding that they are a quick harvest and require the same nutrients and other environmental conditions. He hopes to expand to tomatoes and other produce that will require a different grow room.

Denver has other indoor growing operations. The GrowHaus, a nonprofit in the Elyria-Swansea neighborhood, also has a hydroponics farm, which sells produce to neighborhood residents and restaurants. Circle Fresh Institute in Wheat Ridge teaches classes to students interested in greenhouse farming.

In its 5,400-square-foot grow area, Infinite Harvest can plant an acre's worth of produce in one-tenth of the space.

There is no risk of contamination in aquaponics which has been incorrectly cited in the article and should be corrected. There are pros and cons as it relates to aquaponics vs. hydroponics but contamination is not one of them. Fish do not carry pathogens such as E.coli or Salmonella which is actually one of the advantages of growing with aquaponics.