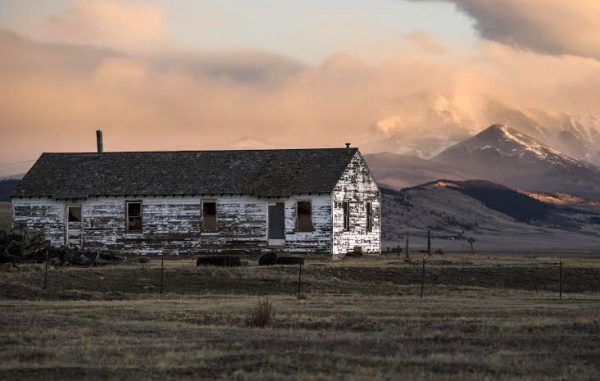 Mount Silverheels rises above the Cook’s House at Buffalo Peaks Ranch, which could be the first building for Rocky Mountain Land Library. (Courtesy Michael Ciaglo)

The next chapter for two book lovers trying to build a Western-themed library and literary retreat in the High Country will be written into the history books in eight days.

Will they hit their Kickstarter goal of $125,000 and begin renovations of an old building at a 1,500-acre ranch-turned-retreat?

Jeff Lee and Ann Martin, who met while working at the Tattered Cover in 1986, have amassed more than 35,000 books spanning the history of the American West. They’re working to turn Buffalo Peaks Ranch, near Fairplay, into the Rocky Mountain Land Library, which they envision as a place for guests to stay and enjoy the books and surrounding landscape.

The Martins launched a Kickstarter campaign to fund interior renovations on the Cook’s House, one of six main buildings on the ranch. With a week left, the fund has more than $71,000 of its $125,000 goal. It needs to hit the goal to get any of the funds.

Lee, 62, said they picked the 1,225-square-foot building as the ranch’s first big project because it has all the elements the Land Library wants: a kitchen, classroom and workshop space, bedrooms and a room for books.

“It’s really a microcosm of what we want to see happen across the ranch,” Lee said. “Our goal is, by the end of the summer, to have people stay (at the house).”

Lee is working with architects Ted Schultz, Dan Mitchell and Allie Vostrejs to turn the home into a multi-functional space for guests to stay, hold workshops and enjoy the residential library.

The Martins came up with the idea for the Rocky Mountain Land Library on a trip to the London Book Fair in 1996. The couple stayed at a residential library in North Wales called Gladstone’s Library, where they first wondered why Colorado didn’t have something similar.

“We loved it and it had this amazing library,” Lee said. “Attached to it, as part of the estate, there were these dorm rooms … it was a relatively inexpensive place to stay.” 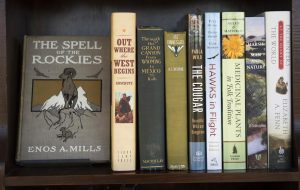 A selection of books that could be found at the Rocky Mountain Land Library. (Courtesy Michael Ciaglo)

At that time, the couple had collected about 5,000 books. In 2013, they signed a 95-year lease on 60 acres of Buffalo Peaks Ranch from the city of Aurora.

When Aurora built Spinney Mountain Reservoir just south of Fairplay in the mid-1980s, the 54,000-acre reservoir took up a significant amount of fishing streams. To create another option for fishermen, the city bought Buffalo Peaks Ranch to open up a 4-mile section of the South Platte River.

“It was a pristine fishing spot,” Aurora Water spokesman Greg Baker said. “The river … is now open to more fishermen. It’s all this mitigation we have to do.”

Now, Lee and Martin have more than 35,000 books, 98 percent of which are stored for free by Acme Distribution. Their collection focuses on natural and Western history, which explores the ranching, mining, fur trading and Native American legacy of the West.

“It’s all about people’s relationship to the land,” Lee said.

Lee said he’s spent $250,000 on the book collection, adding that book donations have increased in the last five years. He’s received about $150,000 in grants and donations for the library project. It will cost about $5 million to renovate Buffalo Peaks Ranch into the library, Lee said.

While Lee and his wife still work full time at the Tattered Cover, they recently hired a part-time fundraiser.

“If funding was not slowing us down, I could see it all happening in five years,” Lee said. “This isn’t just an idea. We have the books. We have the ranch. I think it could be time for larger donors to come in and really move the project forward.”

In addition to Buffalo Peaks Ranch, the Land Library has two locations closer to Denver: a kids’ library at Waterton Canyon, as well as an urban library and education center in the works in Curtis Park.

Mount Silverheels rises above the Cook’s House at Buffalo Peaks Ranch, which could be the first building for Rocky Mountain Land Library. (Courtesy Michael Ciaglo)

The next chapter for two book lovers trying to build a Western-themed library and literary retreat in the High Country will be written into the history books in eight days.

Did I miss a link to the crowdfunding page? Seems you should have one so anyone reading that wants to support can easily join the campaign.

Hi Jimmy, I see it as a hyperlink on ‘Kickstarter’ near the top. The crowdfunding page is: https://www.kickstarter.com/projects/1402759381/buffalo-peaks-ranch-a-literary-home-on-the-range

Jimmy – The link appears near the start of the fourth paragraph. The word ‘Kickstarter’ is hyperlinked.

or a shorter link for your convenience:

This is a cause every Coloradoan should embrace and support. I can’t think of two more qualified people to lead this effort than Jeff Lee and Ann Martin. Tremendously industrious bibliophiles. Let’s all help them reach their goal!