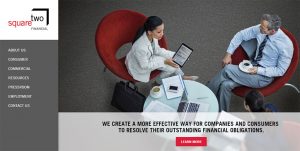 Saddled with $460 million in debt, a Centennial-based debt collector has filed Chapter 11.

SquareTwo Financial, which has more than 200 employees at its DTC headquarters and call center, filed its bankruptcy petition in the Southern District of New York on March 19.

The company confirmed through a spokesperson that it will shut down all its operations, including its 60,000-square-foot office in Centennial, by the end of the year.

SquareTwo reported assets of $311 million and liabilities of $460 million. Its bankruptcy plan calls for erasing $130 million in debt.

Court filings show SquareTwo seeks to sell the business to a South Carolina collection agency, Resurgent Holdings. According to bankruptcy filings, Resurgent would invest $405 million and pay $264 million for equity in certain SquareTwo subsidiaries. SquareTwo then would pay off selected creditors and wind down.

P. Scott Lowery started SquareTwo Financial under the name Collect America Ltd. in 1994. The University of Denver-educated lawyer then started a law firm franchise to grow the business.

Collect America would buy past-due debt from banks, credit card companies and other lenders below face value, sending it to franchisee law firms to collect. In exchange for back-office support from Collect America, franchisees received a fee and sent the collected money back to the firm. The company has since dropped its franchise model, but still works with a network of law firms.

Since 1994, SquareTwo has spent $2.7 billion on past-due accounts with a face value of $39 billion. It operates in the U.S. and Canada.

Lowery is now a senior advisor to the company he founded, according to his LinkedIn profile. He also is the namesake for the only Denver-area law firm in the SquareTwo network, P. Scott Lowery Law Office.

But the company struggled to make a profit. In SEC filings, SquareTwo reported a net loss for three consecutive years, from 2009 to 2011. It peeked back into the black in 2012 and 2013 before again slipping into the red. In 2015, the company reported its largest net loss, $117.7 million.

According to bankruptcy and SEC filings, SquareTwo tried to reduce costs by attempting to collect debts through call centers and mailings before forwarding accounts to the 13 law firms in its network. But bankruptcy filings show the company relies heavily on legal collections for revenue.

SquareOne began trying to restructure outside of bankruptcy court in 2015, landing a new set of loans to repay or buy back existing debt in May 2016. The firm then tried to find a buyer for its business. Last month, talks with a potential acquirer broke down, forcing the company to start courting new bidders.

Now SquareTwo thinks it has found a way back to square one.

It aims to sell its business to a Greenville, South Carolina loan servicer and collection agency, Resurgent Holdings. Resurgent is an affiliate of Sherman Financial Group.

SquareTwo has 283 employees, according to bankruptcy filings, most in its corporate office and call center in Centennial at 6300 S. Syracuse Way. The firm leases 60,000 square feet there, according to a Colliers International broker marketing the property. SquareTwo also has a data center in Englewood.

Its bankruptcy counsel is Willkie Farr & Gallagher in New York City. It also hired a law firm in Canada and a pair of New York investment banks.

The company will shut down all its operations, including its 60,000-square-foot office in Centennial, by the end of the year.

Not sad to see them go belly up. P Scott is a true bottom feeder…

I hope that each executive is chased by a debt collection firm.
Karma.

What will happen with de bonds holders maturity date 04/01/2017 ? They are Senior Secured Note

Square Two intends on NOT paying the senior secured bond holders of notes due 4/01/2017 anything. How is this even possible. They want to file chapter 11, pull up stakes and go to Canada. Really? I see lawsuits everywhere. Not at all happy as a bond holder. Never Ever been this screwed this bad in a bankruptcy. NOTHING???