Denver startup Fluid hopes customers will use its app to rent tools, toys and trucks from their neighbors.

But for its office, the company is choosing not to share.

On Friday, Fluid showed off its new 2,900-square-foot office in Five Points, taking up a full floor above digital marketing agency Brand Iron. They relocated to the larger space in Feburary, after launching the company from shared office spaces in Galvanize and WeWork.

Fluid aims to let people make money from unused stuff in the same way that Airbnb lets users profit from unused space. Fluid users post an item — whether virtual reality goggles, mountain bikes or power washers — for other app customers to rent for an hourly, daily or weekly rate.

The company keeps a 20 percent cut of each transaction.

For co-founder James Eberhard, 38, the idea for Fluid came after buying an $85 tool from Home Depot.

“I used this tool for 20 seconds and then it sat around my house,” Eberhard said, adding that he found out later his neighbors could have lent him the tool. “It’s just so crazy you go out and buy this stuff you use once.” 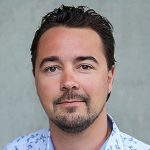 Eberhard launched Fluid on June 30, 2016. Now, the app has more than 10,000 users in the Denver metro area, he said, who are exchanging tens of thousands of dollars every month from renting their stuff out.

The coolest thing on Fluid right now: a commercial drone renting for $30 per day, Eberhard said. The app also has a Tesla Model X for $209 per day and a short school bus for $299 per day.

Eberhard said the startup has received $1.7 million in funding so far. Its investors include New Enterprise Associates, GroTech Ventures, Correlation Ventures and other angel investors.

Fluid has a $1 million insurance policy to cover rented items that get damaged, as well as a separate insurance policy for vehicles. In addition, Fluid has a rating system similar to Uber, where renters and owners rate each other and their items. Fluid looks into anyone or anything below four stars, Eberhard said.

“The community is self-regulated,” Eberhard said. “On our platform, you rate the item and you rate the person … it really helps to preserve and keep good quality things.”

So far, Fluid is just in Denver. But Eberhard hopes to take the app to other U.S. cities within a year, although he would not disclose details.

After launching the company from shared office spaces, a Denver startup has gotten comfortable in its own Five Points location.