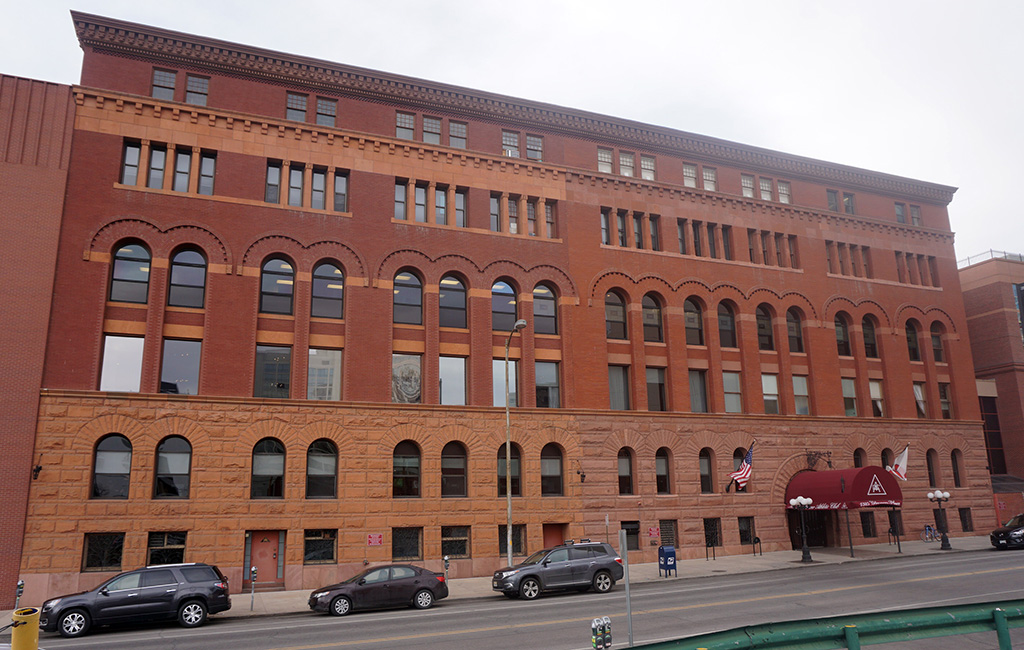 The Denver Athletic Club is planning upgrades to its fitness center at 1325 Glenarm Place. (Courtesy DAC)

The Denver Athletic Club is about to put $2 million into its 133-year-old building, upgrading cardio equipment, locker rooms and common areas.

“We want to keep our club in a first-class position and we think the upgrade will increase our membership,” said Jeff Dykes, president of the board. “It will meet the high expectations of our existing members, and it will also create demand for others to join.”

The project will begin in March and wrap up by July. Dykes said the club nearly broke even last year, and has added 100 memberships annually for three years.

Financed in part through a $1 million loan from ANB Bank, the renovations include a new floor plan in the fitness area with new carpet, paint and lighting. And the gym is replacing 75 percent of the cardio machines with new elliptical cross trainers, bikes and treadmills.

The locker rooms will get some love, too, with remodeled showers, new wooden lockers and new vanities. The atrium and common areas will also receive new carpeting and furniture.

Ohlson Lavoie Collaborative is the architect behind the redesign.

This is not the first time the Denver Athletic Club has had some work done. After a 1950s fire destroyed parts of the building, the club rebuilt damaged areas. It added its current fitness center in the 1980s, Dykes said. Two years ago, it remodeled its main restaurant, the Tavern.

Dykes said most of the club’s members live or work downtown, and more millennials have joined in recent years. A full family membership costs $495 for initiation and $300 per month, Dykes said.

Dykes said many members use the facility for social and business connections through regular meetups and events.

“That really sets us apart from a club that’s only designed with lots of mirrors and stainless steel and fitness equipment and barbells, because we really offer something beyond that,” Dykes said.

The Denver Athletic Club, which is taxed as a nonprofit, brought in revenue of nearly $10 million in 2014, the most recent year for which tax information was available.

The Denver Athletic Club is planning upgrades to its fitness center at 1325 Glenarm Place. (Courtesy DAC)

The club plans to upgrade cardio equipment, locker rooms and common areas in an effort to increase membership.

As a DAC member for the past 9 years I can say this: Stop changing everything! New management is ruining the classic elegance of the club and turning into a Lodo style gym. That’s not what any of us signed up for.

I’ve belonged here for 14 years I think. My dues have increased, but I have ignored due to the tradition of this very cool club. Writing might be on the wall that a two million renovation may make me leave :(. Sad that management couldn’t discuss this with me before I read about it in a random magazine.

The article talks about new carpet, equipment, paint, lighting , new locker rooms, furniture, some changes to the common areas. These sound positive, not changing the historic character of the club. The Tavern is a recent example of a change that really upgraded that space. The bistro uncovered a bit more of DAC history too. This is the BEST club in Denver! The GM and Board do a great job of communicating changes and the state of the state of the club every month. We have the benefit of state of the art equipment, facilities, trained staff,tons of free classes, restaurants, snack bar, pub, card room, gym, a monthly art installation, robust and varied social events… I could go on and on. I’m pretty excited that my DAC experience will be enhanced not reduced. Member since 1993.

As the architect for these renovations, we have taken the rich history and tradition of the DAC into consideration at every turn with the latest design. We will be maintaining the classic elegance where it currently exists, and returning the areas that need some TLC to their previous grandeur. We’ve had a lot of meetings with members and committees at the DAC, and we realize that people are often too busy to attend any extra events, but if you are interested in seeing what is proposed, please contact the Club and find out more about it. I think you’re going to love what we have in store for you!