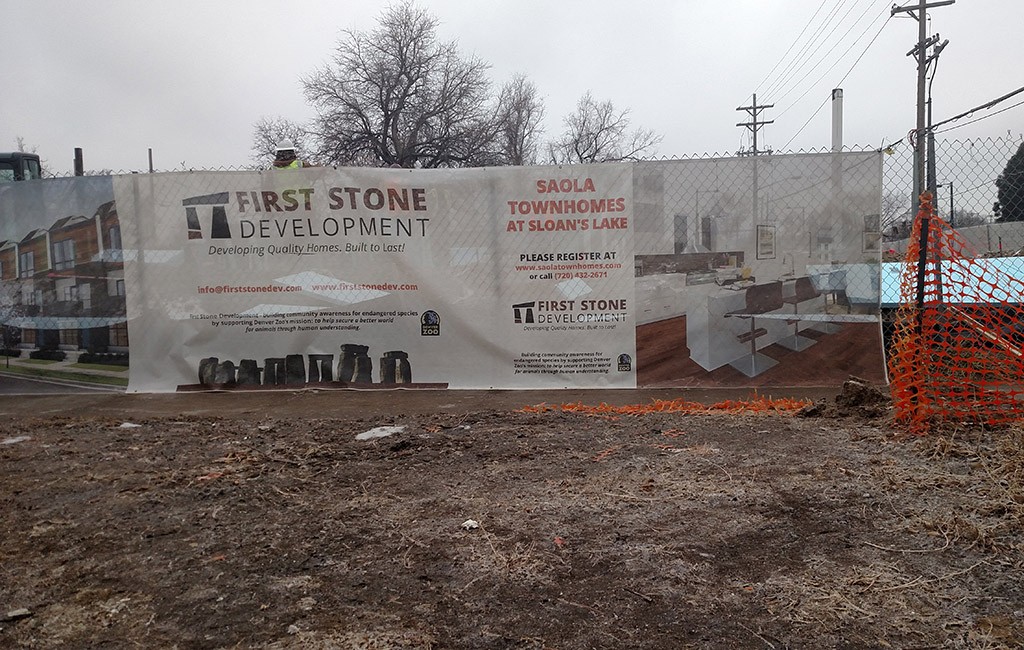 Seventeen townhomes are under construction at 1530 Irving St. in Sloan’s Lake. (Burl Rolett)

Frontier Airlines isn’t the only company that likes the animal motif.

Lenny Taub, who made his living building New York City condos before moving to Denver last year, is working on 60 townhomes between three sites in western Denver – each named for an endangered animal.

Taub said he got turned on to Denver by his broker, Alex Leder.

“One day he came back from a visit and said, ‘Lenny you should really go out to Denver and have a look around, the place is exploding,’” Taub said. “He was right. The first thing I saw was the construction, all of the cranes, and thought this is really something I should look into.”

The Sloan’s Lake project is the farthest along, with a full construction crew onsite. Those homes will run from about 1,200 square feet to 1,800 square feet. The project is called the Saola Townhomes, after a deer-like animal with horns whose dwindling population grazes the forests of Laos and Vietnam.

Taub bought the Sloan’s Lake site in 2015 for $1.47 million. He said he liked the growing population in the neighborhood, and thought his product would appeal to the type of buyers looking at Sloan’s.

He also said it just felt right once he got his feet on the ground. 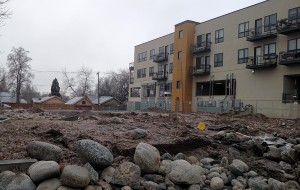 Seventeen tonwhomes are planned for the site at 3352 W. 38th Ave. (Burl Rolett)

“The first thing I do is study the market, what’s going on, the demographics,” Taub said. “Then I go by instinct, I walked the area and I saw a vibe in Sloan’s Lake. There was an energy.”

His 38th Avenue project sits next to the recently opened Highland Place apartment building off 38th Avenue and Julian Street. First Stone bought that site in May 2016 for $1.6 million. It demolished a couple smaller buildings, but Taub said construction won’t start for a few months.

Taub said those townhomes, named after an endangered species of porpoise, will be about the same size as the Saola homes in Sloan’s Lake. But he thinks they might sell for a higher price.

The third project in Taub’s pipeline is on the 4400 block of Tennyson Street. He’s calling that one the Condor. It’s the biggest of the three properties at 26 units, but Taub said it will have the smallest townhomes.

“That neighborhood really calls for smaller units,” he said. “It’s usually singles or couples, and a lot of first-time buyers.”

The Condor is eight to nine months from taking flight, and Taub said it would take 15 months to build once shovels are in the ground. He’s hoping to pull about $400 per foot on Tennyson Street, which would put a middle-range, 1,300-square-foot unit at about $520,000.

Taub said those targets could move before the first Tennyson Street homes would likely open in two years.

“I don’t have a crystal ball,” he said. “But the way the market has been going, every year there has been an increase.”

Marketing director Susan Taub hopes the animal theme will help the townhomes stick out in neighborhoods with many new for-sale homes.

“The interesting thing, architecturally, is we’re going to include in our façade something that represents the habitat of each of the animals,” she said.

The firm also plans to build a statue of the animal each building is named for, with facts about how they live and why they’re endangered.

And there’s a perk for the buyers, too.

Each buyer will get a free family membership to the Denver Zoo with the purchase of their new half-million-dollar home.

Seventeen townhomes are under construction at 1530 Irving St. in Sloan’s Lake. (Burl Rolett)

A New York City condo developer is working on 60 townhomes between three sites in western Denver -- each named for an endangered animal.

are they going to help the endangered animals or just endanger more animals?