Local startup Revolar sketched out enough ideas to make a secret agent salivate: a ring with Revolar’s device concealed in its gemstone, a Revolar-equipped wristwatch that sends a distress signal if its wearer’s heart starts racing and a voice-activated Revolar alarm to warn bystanders of danger. 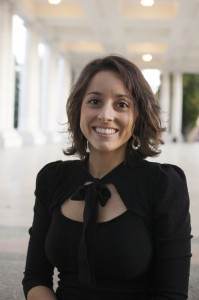 The patent covers more ground than the button small enough to hook around a keychain Revolar debuted this spring. Designed for emergencies when a user cannot call or send a text message, Revolar’s current product sends a message and link with the user’s location.

Revolar founder Jacqueline Ros, who is listed as an inventor on the patent, envisioned Revolar while in college. She remembers using her graduation gift money to pay for the patent, which records show she filed the day before Christmas Eve of 2014.

And in those intervening years, Revolar has passed many milestones: it landed a spot at startup accelerator Techstars and local venture capital from the Foundry Group, and has now raised at least $4.7 million from investors, according to SEC filings.

In April, the 3-year-old startup started shipping the first version of its device–a clip-on button connected wirelessly to a mobile phone.

The patent, a wide-ranging riff on the Revolar device now on the market, describes a product that would fit the script of a spy movie.

It imagines a user concealing Revolar in “a necklace, amulet, bracelet, ring” or, if not jewelry, “a watch, sunglasses, a pin, a brooch, a belt buckle,” not to mention sweatbands and athletic accessories. To an onlooker, a Revolar wearer sending an alert would only appear to be fidgeting. 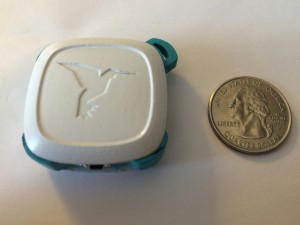 “For example, a button on a watch that appears to be a button that adjusts a setting of the watch may in fact be an activation button,” the patent suggests. “Similarly, a gem stone on a ring may actually be an activation element that a user pushes, twists, or the like, to activate the alerting device and/or the wearable accessory.”

Mark Damschroder, the startup’s lawyer, said Revolar didn’t pursue many of the accessories described in the patent for the first version of its product. But he said fitting Revolar into different accessories – say, a wristwatch band – is still a possibility.

“I’m not sure which accessories we’ll come out with,” he said. “And I’m not announcing any accessories today.”

The patent also envisions new functions. One patented feature would send an alert if Revolar sensed its user had an “increased heart rate,” which “may signal certain emotions such as fear, anger or the like.” Similarly, the patent continues, failure to detect a heartbeat or a change of position could trigger an alert to loved ones.

The patent also covers a potential mapping application, in which a Revolar wearer could find the safest route home, using information like crime data, street light location and business hours.

Damschroder said Revolar will decide which new features to develop based on customer feedback. He said tweaks to the technology like voice activation or a video camera trigger are still on the table.

Local startup Revolar sketched out enough ideas to make a secret agent salivate: a ring with Revolar’s device concealed in its gemstone, a Revolar-equipped wristwatch that sends a distress signal if its wearer’s heart starts racing and a voice-activated Revolar alarm to warn bystanders of danger.

The patent, a wide-ranging riff on the Revolar device now on the market, describes a product that would fit the script of a spy movie.

This is the type of innovative and creative thinking to leads to a greater economy. Great work, Jacqueline!