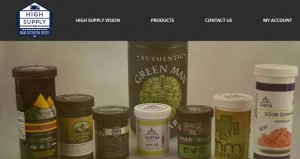 Packaging company High Supply filed for bankruptcy on Sept. 30. Its CEO, Paul Lufkin, retreated into bankruptcy as he fights out a separate legal case claiming a former High Supply co-owner and other employees tried to launch another marijuana packaging firm in violation of a non-compete agreement.

In a handwritten note in the bankruptcy filing, Lufkin wrote that the Chapter 11 filing was a result of “severe financial stress” caused by “theft and corporate espionage by former employees.”

But in an email to BusinessDen, the lawyer representing High Supply’s former co-owner and other former employees said his clients believe the bankruptcy is the result of the new owners’ “own poor customer service and decision-making since the sale was completed.”

The filing released Monday, which was incomplete, tallied debts of $245,000. A note by Lufkin says High Supply will disclose other financial details once it has access to online records.

Lufkin and investors from Green Leaf Acquisitions bought High Supply from co-founder Justin Walker and Aaron Israel last year. The price for the company, including stock, was $400,000.

According to court documents, Walker remained at High Supply as president and signed a non-compete agreement barring him from working with High Supply competitors. He also continued to run his printing business, Pressroom 2.0, sharing space with High Supply at 4200 Jackson St.

A year later, Walker and Lufkin began to spar, when Walker and Israel claimed they had not been paid for their ownership stake in full.

Green Leaf countered with a complaint claiming Walker and other employees violated a non-compete agreement by “(conspiring) to establish new competing operations in a Denver location” with a challenger to High Supply called Elevated Resource and Branding Supply.

At the end of March, a judge barred Walker from owning or working for any packaging business that supplies marijuana companies. But he allowed Walker to continue operating Pressroom 2.0 under the condition that High Supply be its sole marijuana packaging customer.

The court also ordered Green Leaf to pay Walker and Israel stock valued at $150,000 each, as stipulated in their sale agreement.

Tobin Kern of Volant Law is representing Walker, Pressroom 2.0 and other employees in its case against High Supply.

In a brief filed in court, Kern said Green Leaf cannot “stretch” Walker’s non-compete agreement to include other people and businesses named in the suit, which currently work in the marijuana packaging business.

“Competing with a prior employer after quitting (or being fired, as in this case), using legitimate means such as long-established personal and business relationships, or even making plans to quit” does not violate laws cited by Green Leaf, Kern wrote.

Stuart Pack and Lisa K. Mayers of Spencer Fane in Denver are representing Green Leaf Acquisitions and IW Group, which does business under the name High Supply, in its case against Walker and other defendants. High Supply has not yet appointed an attorney for its bankruptcy case.

Daniel A. Wartell and Lidiana Rios of Jones & Keller are representing Elevated Resources and Branding Supply as well as other defendants named in Green Leaf’s complaint.

Lufkin’s dealings with Denver companies have landed him in bankruptcy and county court before.

After he purchased a majority stake in a Denver-based electronic checking business called eCashflow Systems in 2005, its founder sued him claiming that Lufkin never paid him in full for his equity shares. Investors also sued, saying Lufkin mismanaged company funds.

A year after Lufkin bought another electronic payment company, eFusion, in 2012, it declared bankruptcy and accused its former owners of “looting” its profits for themselves.

In a phone conversation, Lufkin said High Supply is filing for bankruptcy with the cooperation of two companies with loans listed as creditors in court papers this week, Canada-based Monster Uranium and Clydesdale Resources.

He called the High Supply bankruptcy case “a pre-packaged Chapter 11.”

Great detailed story..
Just a matter of time before we see some more BK’s in this sector.