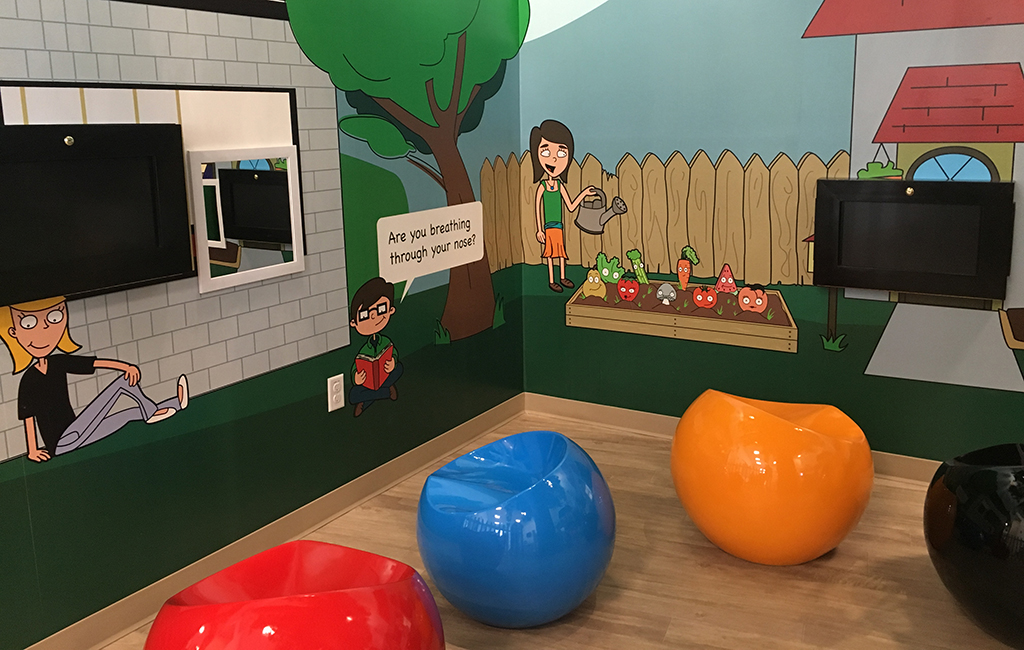 The lobby is set up like a play area, with computers and other games teaching children healthy dental habits. (Courtesy Neo Dental)

A local orthodontist is biting off a $120,000 investment as he seeks to start a dentistry franchise for children.

For the first decade of his career, Kent Lauson repaired crooked grins like most orthodontists: by waiting until patients have all their adult teeth, then removing some and adding braces. But then, in the mid-1980s, he started to learn about evidence linking oral surgery to headaches, neck and back pain, breathing problems and sleep issues.

Now Lauson is aiming to raise $5 million to launch a franchise of children’s orthodontics offices called NEO Dental Centers. The franchise’s goal is to help patients to avoid surgery later in life by teaching them how to breathe, swallow an even place their tongue in ways it says will help their face and jaw to develop correctly.

“I want to change the way orthodontics is done in the U.S.,” he said. “And to grow single practice by single practice it may take me 10, 20 years to get done what we might accomplish in two years with franchising.”

As NEO looks to dive into the multibillion-dollar North American dentistry market, it will compete with other oral health groups: franchise Comfort Dental as well as chains like ClearChoice Dental Implant Centers.

Lauson opened the first NEO office this spring in Lone Tree, a spot he selected for its proximity to the light rail station and to medical professionals working at places like Sky Ridge Medical Center.

The space has a large lobby set up like a play area, Lauson said, with computers and other games meant to teach children breathing exercises and other habits to help their jaws and faces not to grow too crowded for their teeth. There are also private meeting rooms, but Lauson said the NEO center lacks the usual surgical equipment people expect in a dentist’s office.

The NEO approach combines Lauson’s research on breathing and swallowing techniques as well as correct tongue and lip placement with the use of an oral appliance called the Myobrace made by an Australian company, Myofunctional Research Co.

The Myobrace, which has been in use for about two decades, is a removable appliance patients place in there mouths. It’s intended to train people to breath with their mouths closed and keep their tongue on the roof of their mouths.

Children can use the Myobrace while they still have baby teeth. They use it for a two-year period, wearing it for an hour a day and overnight.

Starting next week, Lauson will be presenting to dentists in the hopes of signing franchisees for more NEO offices. Lauson said the capital raise will primarily fund more NEO centers in metro Denver, each about 3,000 square feet. Lauson said new centers will each cost about $600,000 to start.

Regulations require dentist’s offices to be owned by the dentist themselves, Lauson said, but potential franchisees may seek capital from a bank, a private equity group or other lenders to finance their location.

The lobby is set up like a play area, with computers and other games teaching children healthy dental habits. (Courtesy Neo Dental)

A local orthodontist is biting off a $120,000 investment as he seeks to start a dentistry franchise for children.

I would be very cautious of treatment modalities that do not have extensive clinical research behind them as well as longitudinal studies.
Just a heads up from another orthodontist that will only treat patients with modalities that have been proven to work for years.
The myobrace has not been accepted as a treatment modality in any research through the American Association of Orthodontists.

I don’t remember the AAO every having to accept any treatment modality I’ve used (I am a member and active in the organization). Each dentist has the right to use any technique that fulfills the criteria of evidence-based dentistry, which does, of course include clinical research, yes, but also clinical judgement (second) and the desires and needs of the patient (third). You can go http://myoresearch.com/library/categories/C56/ for the first criteria. You can ask those of us who understand that soft tissue dysfunction is the primary etiology of crooked teeth (Show me the evidence that crooked teeth is genetic, Dr. Idiculla), and you may wish to know that mothers will do anything to help their children grow up without the deformity of crooked teeth if they knew it can be done. Wouldn’t you?
Whether by franchise or not, this concept needs a better look.

Interesting to hear from a colleague that there is not scientific evidence for the Myobrace. I invite you Dr. Idiculla to read some of the papers published in peer review journals demonstrating the modus operandi and efficacy of the Myobrace.
I have included the references below for your perusal. Enjoy the lecture !

I will wait for an AJO-DO article. Until then, I recommend buying the myobrace on Amazon if you would like to save money on a very questionable treatment modality.
I’m amazed to know that it is advertised to stop bed wetting.
I am sorry but none of this is legitimate and the AAO has not supported it.

Buyer Beware: Buying a Myobrace, or any other myofunctional appliance, online to save a buck is like buying a jump rope online to lose weight. Of course a jump rope can be helpful, but do you know how to use it? Jumping rope is simple? Then why need a personal trainer to lose weight? Because a personal trainer knows how to guide you along to success. S/he can spot your weaknesses, pick the right exercises (some without the jump rope), and motivate you to success.

Myobrace is not an orthodontic appliance. it is a training system for oral fitness.

P.S. Bedwetting stops when the mouth breathing stops. It’s not the Myobrace. It’s basic physiology (See the Bohr Effect on blood pH buffering and smooth muscle response…you won’t find that in the AJODO either…)

The research behind the traditional orthodontic approach is quite conclusive:

Long-term failure is expected in at least 90% of cases. If our practice is truly ‘evidence-based’, we would be looking beyond what we have used in the past.

It’s time to follow the research, not stick to outdated practices.

Anil,
Here are a couple published studies shown below that may help you understand how bed wetting can be affected by upper airway obstruction and how we as orthodontists can help with many childhood health problems, by creating better airways and facial development at a very early age. Parents say how exciting it is to help their young child develop in a more healthy way. It is not just about straight teeth, but better overall health..

When it comes to servicing kids with quality dental care, it’s so important to make it a fun and relaxing place for that age group. This dental practice seems to do that well.