The owner of a vegetarian restaurant in Capitol Hill will take over Bonnie Brae’s iconic Campus Lounge.

Dan Landes of City, O’ City is the new owner of Campus Lounge at Exposition Avenue and University Boulevard, COC general manager Erin Skahan confirmed in an email to BusinessDen.

The Denver Post broke the news Tuesday that longtime Campus Lounge owner Jim Wiste was planning to exit the restaurant business after purchasing the dive in 1976. Sunday is his last day.

The corner of Exposition and University has been home to a restaurant since 1946, when it opened as the Bel-Aire before switching to the name Campus Lounge three years later. 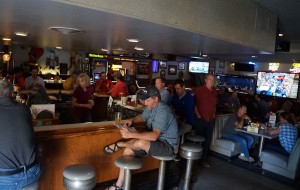 The spot opened as the Bel-Aire in 1942 before switching to the name Campus Lounge three years later.

Under the ownership of Wiste, a graduate of the University of Denver and a former professional hockey player, the Campus Lounge maintained a well-worn menu with affordable staples: hamburgers and fries, Pabst Blue Ribbon cans and Coors Light on draft.

Wiste is now 70 years old. Earlier this month, he told BusinessDen he was considering a sale, but hadn’t yet settled the deal.

“If I sold, I’d like to come in and be a customer and be with all my friends,” he said. “For everybody’s sake, I’d hope they still make it a restaurant.”

Landes, meanwhile, landed on the Denver food scene in 1998 with the vegetarian-turned-vegan restaurant Watercourse Foods, which he sold in 2015. He started City, O’ City in 2006 and opened the restaurant’s vegan bakery operation to the public last month.

Landes also operates a menu of businesses outside of the food industry. He owns a hostel in Mexico, has written two novels and is the founding editor of the Denver-based magazine and book publisher Suspect Press.

The owner of a vegetarian restaurant in Capitol Hill will take over Bonnie Brae's iconic eatery.

Thrilled to have a veg restaurant in this neighborhood! I used to live walking distance from there years ago, but will happily make the trip back to patronize a vegetarian (dare I hope for vegan?) restaurant that may be as good as Watercourse.