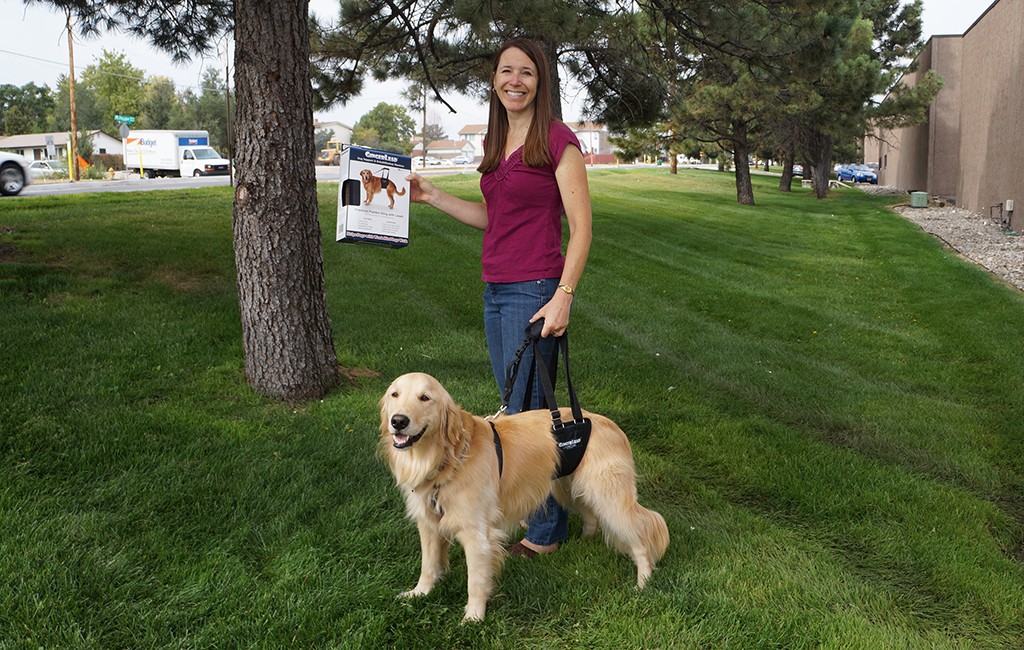 When Liz Rubinstein hand stitched a dog harness to help lift her Golden Retriever’s unsteady hind legs, she never thought the tool would tug her into a new career.

But in 2008, she started a company to sell the harnesses and named it GingerLead. Liz and her husband, Barry, have since sold 40,000 pairs and received three patents on the invention, a sling that wraps around a dog’s abdomen with a handle on top so a human can lift to support the dog’s back hips and a leash that hooks into the dog’s collar.

“We weren’t looking to start a business,” said Liz. “We were just trying to help our dog.”

A patent granted on Sep. 13 marks the third in a litter of applications approved for GingerLead since the couple started applying for intellectual property protection in 2008.

GingerLead’s namesake is the pair’s Golden Retriever, Ginger, who underwent hip surgery as a 6-month-old pup and then knee surgery later in life. Liz fashioned the first GingerLead as a secure way to steady the rambunctious Ginger while she recovered from surgery.

Liz is an attorney by training and Barry is a consultant that teaches companies to use Oracle software. When they realized that neither veterinarians nor the U.S. patent office had better alternatives to their homemade device, they decided to find a manufacturer to make more prototypes. 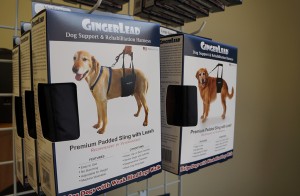 GingerLead has sold 40,000 units and received three patents on the invention. (Amy DiPierro)

But it was 2008 and the pair found their business on a short leash. In the midst of the economic downturn, manufacturers were reluctant to produce an item that had never seen store shelves.

“A lot of people didn’t even want to talk to me about a new product,” Liz said.

And when a local manufacturer finally signed on, the Rubinsteins feared their new supplier might not survive long enough for GingerLead to ship product to its first customers.

Meanwhile, Liz visited veterinarian’s offices across Colorado looking for facetime with docs, but often left with her tail between her legs when a receptionist turned her away at the gate.

So the pair took drove to Orlando, Florida for their first veterinary conference, shipping orders for the harnesses along the way as dog owners ordered through the website. Then vets at the conference ordered for their veterinary practices and GingerLead started selling to retailers, too.

From their 2,150-square-foot office and warehouse at Hampden Avenue and Santa Fe Drive, GingerLead now sells harnesses to more than 100 pet stores and even more veterinary practices, including Chewy’s Bonetique and the Park Animal Hospital & Wellness Center.

It has been harder to get national retailers to bite. Upon seeing the words “Made in the U.S.A.” on GingerLead packaging, one independent broker at a trade show told the Rubinsteins they would have to move production overseas in order to hit the profit margin demanded by large chains.

“We go to some of the retail trade shows and the people there make no secret that if you want to get to the bigger stores, they want more margin,” Liz said.

But instead, GingerLead has stuck to three manufacturers in Colorado: Colorado Contract Cut & Sew in Denver, Sportwaves in Lafayette and JAKs Contract Sewing in Mead.

GingerLead comes in seven sizes, with options for male and female dogs. Liz said the company sold 14,000 units last year.  Each retails between $36 and $60, depending on the size; wholesale orders of a dozen or more get a half off volume discount.

Some dog owners send fan mail. There was the 225-pound St. Bernard that wore the same GingerLead harness for two years. There was the woman who could finally help her dog downstairs when her husband was at work during the day.

Liz is GingerLead’s single full-time employee; Barry continues to do consulting work and five other workers are part time.

The husband-and-wife still take a dogged approach to sales: This calendar year, they will pitch at a dozen conferences and trade shows from Virginia Beach to San Diego.

A husband-and-wife team has sold 40,000 units and received three patents on the invention, a sling that allows owners to help support their dogs' hips.

I am so happy to learn about your harness as I have a Maltese with hip problems.
Congratulations on the success of your business.
Nan

Thank you for your kind words! If you have any questions or if we can help you and your Maltese, feel free to call our office 303.482.2074 or you can learn more and order online at http://www.gingerlead.com