GrowCo leases all the space in its existing greenhouse to Johnny Cannaseed, a Denver cannabis grower. (Courtesy of GrowCo)

Denver-based GrowCo, which operates one greenhouse at its 160-acre site in southern Colorado, earlier this month applied for a new round of debt security funding in an SEC filing. CEO Wayne Harding said the company is on target to hit its funding goal.

“We have a number of private, accredited investors who are interested in the business,” Harding said.

GrowCo is a subsidiary of Two Rivers Water & Farming Company, a Denver-based agriculture firm that specializes in providing irrigation services to farmers in the Arkansas River basin. Harding serves as CEO and CFO of Two Rivers.

The firm is leasing all the space in its existing greenhouse and second greenhouse to Johnny Cannaseed, a Denver cannabis grower formed in April by former Two Rivers and GrowCo CEO John McKowen. McKowen resigned from both firms in May before his new venture signed a five-year lease with GrowCo. Harding said GrowCo’s previous tenant was evicted this month for not paying rent. 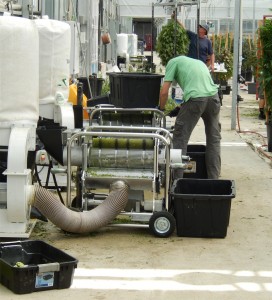 Cannabis growers use GrowCo’s facilities to grow, monitor and process the plant.

“This new tenant is for the long term,” Harding said.

GrowCo acts as a landlord to cannabis growers, who use GrowCo’s facilities to grow, monitor and process cannabis.

Colorado does not permit cannabis landlords to share profits with growers.

The company launched in 2014. It claims its existing greenhouse is the largest cannabis greenhouse growing facility in Colorado.

Harding said GrowCo had raised $14 million prior to its latest funding round. He expects the $7 million to be raised and the second greenhouse built by the end of the year. GrowCo reported the first sale for this round of funding as occurring March 16.

“We’re looking at joint-venturing with other companies and going to other states as cannabis gets more acceptable,” Harding said.

GrowCo leases all the space in its existing greenhouse to Johnny Cannaseed, a Denver cannabis grower. (Courtesy of GrowCo)

Michael,
Wondering what your take is on this GrowCo situation. Seems like a bit of a scam, but I’m intrigued, particularly since Pueblo is number one on my list for areas to move to to get into the cannabis business next year.
Any thoughts on the upcoming ballot initiative? Clearly this will be huge, and a ban will force me to look elsewhere, likely Colorado Springs.
Thanks for any thoughts you’d like to share.
Sincerely,
Sven Kingston
Black Cat Botanicals