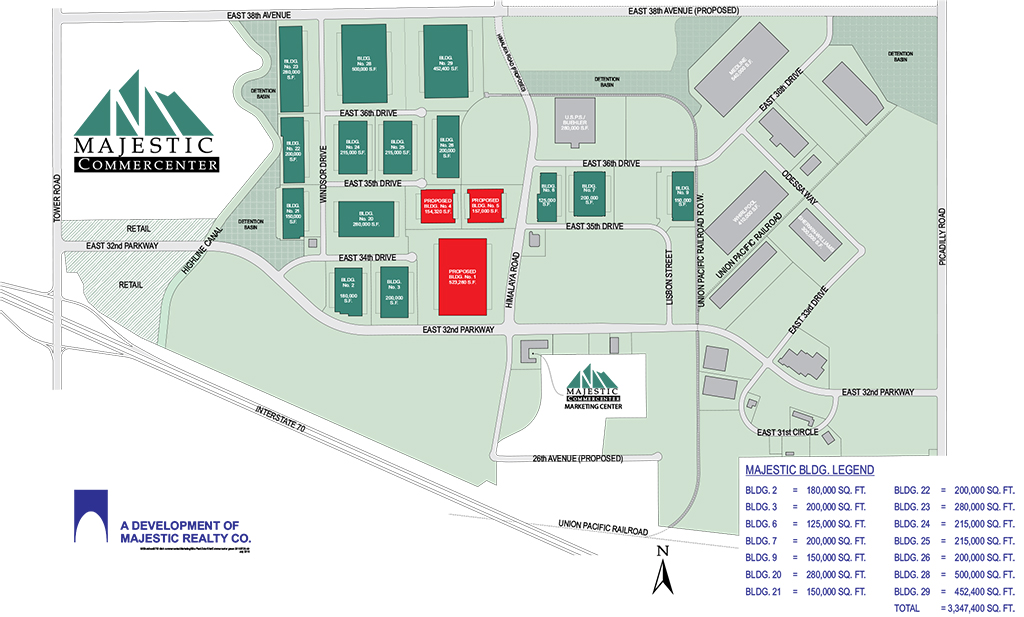 A massive Aurora industrial park is about to get its biggest warehouse development yet.

Majestic Realty Co. will start construction three new buildings at its Majestic Commercenter in the coming months. The 834,500-square-foot project, which Majestic says is the largest single-phase spec warehouse development in state history, comes on the heels of a 452,000-square-foot lease Majestic nabbed with Amazon earlier this year.

“We always want to have product available for tenants in the marketplace,” said Majestic EVP Randy Hertel. “And with Amazon coming in to take all of that building, we felt like we needed to go ahead and start another one.”

A single 523,000-square-foot warehouse highlights the three buildings Majestic will build. The other two will come in at about 155,000 square feet each. Hertel said Majestic would spend about $30 million on the development.

With the large chunk of industrial space coming online all at once, Hertel said Majestic’s plan is to appeal to different pools of potential renters. The larger building could break down into as many as four different units for tenants, between 100,000 square feet and 200,000 square feet. 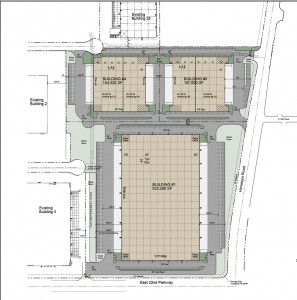 The smaller buildings could again be split into smaller chunks, and Hertel said they’ll chase tenants who need less space for those warehouses.

The plan is to break ground in the next 60 days and have the buildings ready for occupancy in summer 2017, Hertel said. He’s targeting lease rates of about $5 per square foot at the larger building, and $6 to $6.50 per square foot on the two smaller ones.

Majestic’s in-house architects designed the building, and its construction wing – Commerce Construction – will be the general contractor. City National Bank is financing the construction.

The Majestic Commercenter is a 1,500-acre industrial park near 38th Avenue and Tower Road in Aurora. The Commercenter has been under construction since the early 1980s, and Majestic bought the complex in the mid-90s.

Majestic expanded the Commercenter’s footprint by 530 acres last year with a single land purchase west of E-470. Under construction at the park is a 452,000-square-foot warehouse, Building 29, which started as a speculative office project before Amazon leased the building.

There’s still plenty of room to build at the Commercenter. Without touching the 530 acres Majestic purchased last year, Hertel said they could build another 5 million or 6 million square feet. He said that could be 90 percent industrial space, but also could include office and retail development.

The complex’s major selling points, he added, is its proximity to retail and restaurants amenities on tower road and quick access to the interstate.

“There are very few opportunities for larger companies to occupy a quality product with our direct and immediate access off of Tower Road and I-70,” he said. “You’re not passing a residential area, you’re not passing railroad tracks where you could potentially get delayed to get into the business park.”

The 800,000-square-foot project, one of the largest single-phase spec warehouse developments in state history, comes on the heels of a 452,000-square-foot lease the developers nabbed with Amazon earlier this year.