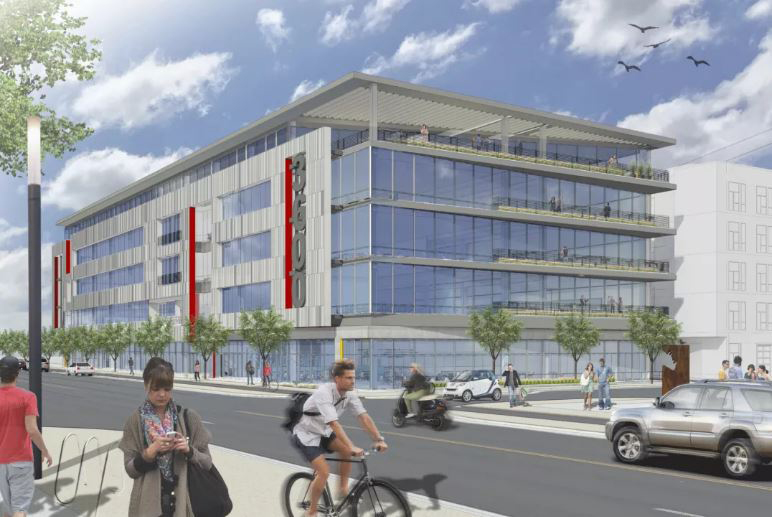 “When you look at what’s going on in Union Station, it’s natural that that whole area will move from Union Station and LoDo right down Brighton Boulevard,” Haselden said. “And what made this particularly attractive to us was knowing the other end will be bookended by everything that’s happening at the stock show.”

The $60 million plot on 36th and Brighton will be ground zero for the RiNo commercial office market, Haselden said.

Dubbed Revolution 360, the project will replace mechanical shop Industrial Motors & Machining. The developers bought the 0.86 acres in February for $3.75 million.

The site hosts a small industrial building that city records say is 60 years old. Haselden said plans call for about 28,0000 square feet of retail space on the ground floor with 130,000 square feet of office space.

Renderings show four stories of office space with a fifth-floor deck facing downtown and the mountains. The building also will have common space on each floor, Haselden said.

“We’ve designed the building for ultimate flexibility,” he said. “Any person in the building, regardless of what company they work for, or the floor they occupy, can go hang out in a first floor-market, work in an open-air area on the fifth floor or (work) on customized balconies on the other floors.”

JLL brokers Roupp, Arnold and Peter Merrion are marketing the office space. Haselden said the asking price is about $30 per square foot annually. He estimated four or five corporate tenants would fill the building, with a couple businesses taking an entire floor.

Zall Co. is leasing the retail space. Plans show a restaurant space at 36th and Brighton with about four retail spaces running along Brighton Boulevard.

Revolution 360 also will have an open indoor market that Haselden hopes to fill with four to nine tenants around a central indoor court. The market will have access from both the street and the alley.

“Think of something like the Source, only smaller,” Haselden said. “It will have that kind of feeling and openness, but more importantly we want to activate the alley and add pedestrian access across the alley.”

Haselden hopes to break ground in the first half of next year, and plans to finish the building in mid-2018.

Anderson Mason Dale, the same group that designed the North Wing and the Triangle Building at Union Station, is the architecture firm for Revolution 360. Haselden’s own Haselden Construction will be the general contractor.

The project’s developers have yet to secure financing. Haselden said they likely will look for loans this fall.

Revolution 360 will be the third office project Haselden and Cohen have tackled together. They built the Millennium Financial Center at 1550 17th St. downtown 15 years ago, and finished Union Station’s North Wing, where IMA is based, about two years ago.

Meanwhile Parkhill, Roupp and Arnold have been staying active a neighborhood over from Union Station in River North. The group is rehabbing a 50,000-square-foot warehouse at 32nd and Walnut streets, where Brooklyn Boulders is planning a new climbing gym.

Haselden said he’s kept an eye on RiNo for two years, even while building in Union Station.

“I toured the building two or three years ago, but I didn’t quite think it was ready for commercial space because I felt like there would need to be more residential there,” he said. “Now the residential development is starting to pan out, and I think this is going to be the commercial hub going through RiNo.”

"When you look at what's going on in Union Station, it's natural that that whole area will move from Union Station and LoDo right down Brighton Boulevard," said Ed Haselden, one of the developers.