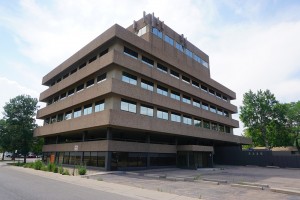 The Martischang building on 48th Avenue may be due for a makeover by new buyers. Photo by Burl Rolett.

After falling into disrepair over a decade of vacancy, a North Denver office building could be coming back.

Brue Capital Partners bought the long-vacant Martischang office building at 5335 W. 48th Ave., north of I-70, this month for $450,000. Listing broker Mike Haley of Fuller Real Estate said the buyer plans to put millions of dollars into improvements to reopen the site.

“The building really needs a substantial amount of work, so Brue Capital is going to put in several million dollars to keep it an office building,” Haley said. “It will have a new skin. And it’s definitely going to get the neighborhood excited, because it’s been an eyesore there for a while.”

Brue’s acquisition is a 33,800-square-foot office building with a 7,400-square-foot parking garage. It sits on a half-acre lot at the corner of Ames Street and 48th Avenue. Chad Brue, principal for Brue Capital, did not return a phone message seeking comment.

Haley, who brokered the sale with fellow Fuller broker John Fuller Jr., said they took the building out to market nine months ago. He said the property was tricky to sell because it requires a lot of work to rehabilitate the structure into a rentable condition.

Haley said one group considered the building for a self-storage site, and another thought about converting it to apartments.

“We did entertain a couple of other groups, but they just couldn’t get comfortable with the money it was going to take to get the building back up and running,” Haley said.

He said the site could be a great turnaround project for a buyer willing to put in the time and money.

He pitched the property on its location in a sparse office market, and said it has great mountain views to the west, city views to the east and overlooks Lakeside Amusement Park to the south.

“There’s Inspiration Point Park to the north, you have the Willis Case Golf Course nearby, and you can tell that this area is starting to turn around,” he said. “The visibility and access to I-70 is excellent, and if anyone wants an office in that area, there really aren’t a lot of alternatives.”

Before leasing office space, Haley said Brue Capital needs to level out floors, re-skin the building, tune the mechanical systems and work on the elevator – for starters.

At least one other Martischang-developed building is in for a rehab. Metro West Housing Solutions is turning the Martischang Plaza building at 5800 W. Alameda Ave. into 160 affordable housing units.

Rogers handled the Alameda Avenue sale and the Denver Foundation donation. He said both were treated in part as a charitable donation – a requirement the Martischang Foundation writes in to all of its real estate sales.

“It’s that component that made both of these deals work,” Rogers said. “Because in both deals there was a piece of the transaction that was a recognized donation to the nonprofit.”

While the Martischang family no longer develops real estate, Rogers said the surviving Martischang Foundation is still active in philanthropy.

“Al was a very unique individual, but he had a heart the size of Texas,” Rogers said. “He gave, and continues to give millions of dollars to charities. Nobody knew about that, and he wouldn’t tell you.”

The Martischang building on 48th Avenue may be due for a makeover by new buyers. Photo by Burl Rolett.

After falling into disrepair over a decade of vacancy, a North Denver office building could be coming back.