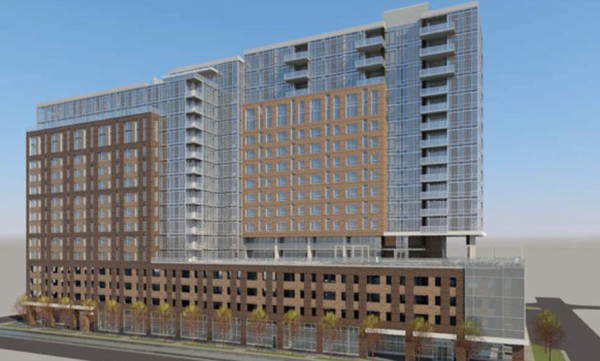 Rendering is by RNL Designs pulled from Denver public records.

With plans for a new, 18-story Five Points tower moving through the city, a major developer has scooped up a block of Welton Street.

Lennar Multifamily Communities bought one-half city block at 21st and Welton streets for $5.5 million last week. The company plans an 18-story apartment tower with 329 residences, according to the most recent set of plans filed with the city.

The site, currently a surface parking lot, covers about 1.15 acres along Welton Street spanning from 21st Street to 22nd Street. A 2201 Welton, LLC, which is registered to Denver developer Howard Witkin, sold the property to Lennar.

RNL Design is the architect. Kimley-Horn and Associates is the engineer. Lennar’s Scott Johnson did not return a phone message seeking comment by press time Tuesday.

The Five Points tower is one of at least two jumbo apartment projects Lennar is working on in downtown Denver. The company also bought a 1.66-acre site at 24th and Blake streets, the former home of River North Brewery, with plans for more than 200 apartments.

Lennar’s building may resemble neighboring downtown towers to the west because of its height.

Trammell Crow Residential is planning a 12-story apartment building on Welton Street’s 2200 block, just one block from Lennar’s site. Continuing northeast, Century Real Estate Advisors has 223 new apartments under construction at 23rd and Welton. And Palisade Partners is putting 82 more apartments and 14 townhomes on the 2400 block.

Meanwhile, firms registered to Witkin still have property holdings along Welton Street. Two Witkin-managed LLCs own the entire south side and the majority of the north side of Welton Street between 22nd and 23rd streets.

Rendering is by RNL Designs pulled from Denver public records.

That’s way too high, crowding too many people together–what will keep it from being a slum in twenty years? And is it designed to be affordable for those who live in the neighborhood now? Do they plan to have adequate landscaping, or all concrete to the curb? When will public comment be considered?