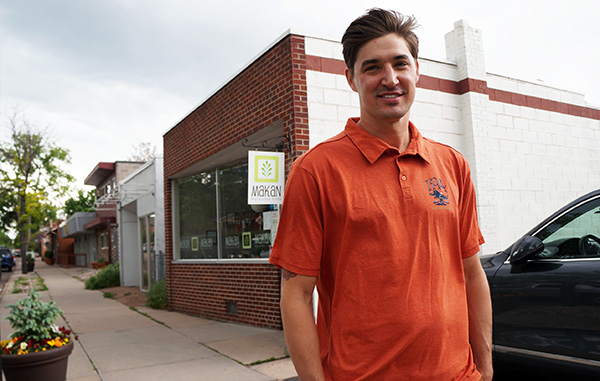 A floatation therapy spa is easing onto South Pearl Street.

But Easy Float founder Bryan Messmer thinks his business will have to swim against the current to succeed because most people think floating in soundproof, lightless tanks is “hippy nonsense.”

So did he, until he took a dip.

“I thought it was bogus,” said Messmer, 31. “But I slept better that night than I had in a year.”

Ten months later, Messmer is leaving other business ventures to focus on floating.

Messmer and his brother moved to the Denver area three years ago to start a Mooyah burger franchise with two restaurants. But after selling one and leaving his brother to manage the other in June, Messmer took his first float, attended a three-day workshop for aspiring floatation centers and started planning his spa.

His goal now is to make floatation less intimidating to the college students (the University of Denver is a short walk east) and yoga enthusiasts in the Platt Park area.

“The meditation crowd, the yoga crowd, they’ll find us,” he said. “What we really want to do is to introduce it to the mainstream.”

At the moment, Messmer admits, his 2,000-square-foot basement looks more like a fight club than a spa. It’s just an empty room with concrete floors and walls lit by fluorescent lighting, plus one small window.

But when the center opens this summer, Messmer envisions visitors walking downstairs to a welcome desk, sipping a cup of tea, touring the spa and taking a shower before settling into a tank.

Messmer also wants to sink the per-float price tag: a 90-minute session will cost $45, compared to $55 at Healing Waters in Northglenn and $65 at Samana Float in RiNo. Hour-long sessions at Denver Floatation Center in Littleton and A New Spirit in Denver cost $65 and $45, respectively.

The space will fit six custom-made tanks, each large enough to hold 200 gallons of water and 800 to 1,000 pounds of Epsom salt. Bill Smith of Intergroup Architects in Littleton is designing the spa and Jim Eckert of Epic Builders in Lakewood is the general contractor. John Livaditis of Axio Commercial Real Estate was Messmer’s broker.

Messmer estimates construction will cost $280,000 and hopes to open by the end of July, pending city permits. He’s funding the project with his own savings and a loan from Accion, the nonprofit lender.

When he’s done, he wants to recruit others to do it all over again. By the end of 2017, he hopes to start selling franchises for four-tank floatation centers.

“If I can help entrepreneurs and cure insomnia (for other people), that would hopefully provide enough satisfaction that I can sleep at night,” Messmer said.