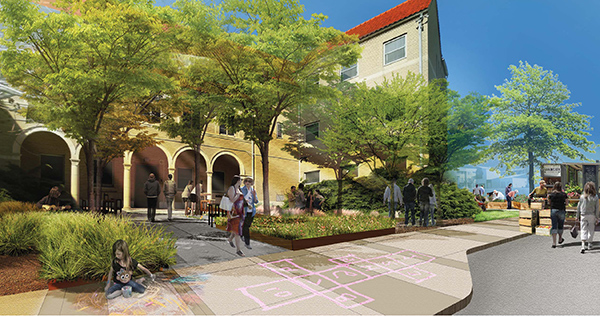 For her next condo project, a long-time developer is betting homeowners will be attracted to a renovated North Denver convent where they can volunteer with their neighbors and help make community decisions.

Susan Powers, president at Urban Ventures, said her firm last month started selling the 28 condos at the former Marycrest convent on the corner of Federal Boulevard and 52nd Street. Construction will start in July, Powers said, and wrap up in the first quarter of 2017.

The 17.5-acre project is across Federal Boulevard from Regis University.

Like most condo projects, units in the Aria community come with a homeowners’ association fee ($4.20/psf/year). But this project is intended for homebuyers looking for a more cohesive community with regular get-togethers – a growing market segment dubbed “co-housing.”

“This is for homeowners who want to know each other’s birthdays,” Powers said. “And if someone needs a babysitter, then they want to do that, too.”

Indeed, the Aria co-housing membership agreement, handed out to prospective residents, suggests that owners have the right to be treated with respect and are responsible to attend as many community meetings as possible, as well as to serve on one or more “teams.”

Powers said she’s designated 2,000 square feet for community rooms, including a kitchen for shared meals in the 55,000-square-foot project. There also will be a screening room for movies and a guest bedroom for visitors, she said.

Ten of the units already are accounted for, she said. And eight of the units are set aside at below-market rates for customers that qualify for affordable-housing discounts.

The construction will be financed with a loan from Kilpatrick Bank. Taylor Kohrs is doing the construction. Studio PBA is the architecture firm.

Powers purchased the former Marycrest convent in 2012 for $2.8 million, she said, adding that Aria Co-Housing will be the second co-housing project in Denver and the 20th in Colorado.

The other Denver co-housing spot isn’t far away. Powers’ development partner at Aria Chuck Perry included a 33-unit co-housing complex as part of the redevelopment of the Elitch Gardens site in Berkeley.

The Marycrest convent, formerly owned by the Sisters of St. Francis, was the home to about 50 nuns for decades. There were just 11 nuns living in the building when Powers bought it.

Powers already built 72 apartments and 13 townhomes at the site, and plans to add 13 more townhomes after the co-housing project wraps up.

Elsewhere in Denver, Powers is also in the middle of a project to add office space along the South Platte River near Mile High Stadium. You can read more about that project, dubbed Steam, here.

Urban Ventures is creating a community in North Denver where residents are expected to pitch in.