When finished, the Steam on the Platte development will include office, retail and restaurant spaces. Rendering courtesy of Urban Ventures.

A Denver developer is making an eight-figure bet that it has found the next RiNo.

Urban Ventures plans to spend $14 million turning a 65,000-square-foot warehouse at 1401 Zuni St. into office space. It has dubbed the project, which is a stone’s throw from Mile High, Steam on the Platte.

Tech firm Nimbl has signed on as an anchor tenant for what Urban Ventures President Susan Powers said she hopes will stir up redevelopment in the industrial area.

“Denver, and the downtown in particular, has been so successful in redeveloping older buildings that there aren’t many left anymore,” Powers said. “When we came across this, it was one of those ‘ahas’ – this could be the next new, edgy neighborhood.”

Last year Urban Ventures bought the block at the northwest corner of 14th and Zuni. The site sits just across Colfax Avenue from Sports Authority Field. The project in its entirety will include office, retail and residential components.

Nimbl, a tech consulting company, has already signed on for 20,000 square feet in the 90-year-old warehouse. Urban Ventures hopes to begin construction near the end of the year and open the office building in fall 2016. 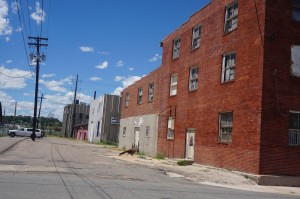 The project’s first major step will be the redevelopment of a 65,000-square-foot brick warehouse. Photo by Burl Rolett.

The finished building will be mostly office space, Powers said, with perhaps room for a coffee shop. Shames Makovsky is handling leasing at the site, and Powers said the asking rate is $24 per square foot.

The project will take the place of a block that previously housed Bremer Soap Factory and a rag baling factory. Champion Enterprises currently occupies a building at 2037 W. 14th Ave., directly behind the brick warehouse Nimbl will move into.

All told, Urban Ventures owns slightly more than 3 acres of land, three warehouse buildings along 14th Avenue and a smaller building fronting lower Colfax. The Colfax-facing building will be redeveloped into restaurant space also as part of the project’s first phase, Powers said.

Urban Ventures will eventually demolish two other warehouse buildings on the site to make way for future development, which could include more office, restaurant and eventually retail projects overlooking the Platte.

“One of the big attractions was to take part of the river that has been forgotten for many years, given to industrial uses and abandoned, and bring it back to life,” Powers said.

The developer is taking on Steam on the Platte in a joint venture with Castle Rock-based White Construction Group. White will also be the general contractor. Tres Birds is the project’s architect. Powers said Urban Ventures has secured a loan for Steam on the Platte but declined to name the lender.

When finished, the Steam on the Platte development will include office, retail and restaurant spaces. Rendering courtesy of Urban Ventures.