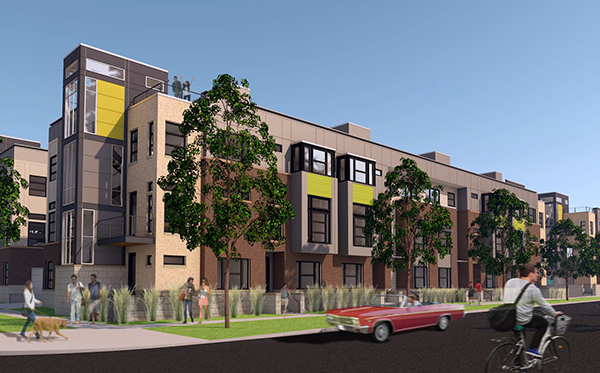 EnviroFinance Group (EFG) sold off another portion of its massive St. Anthony’s site to a developer with plans for 64 new townhomes. The 2.2-acre property covers the block bounded by 16th Avenue, Perry Street, Conejos Place and Quitman Street, and sold for $4.55 million, city records show.

Presidio Sloans, LLC was the buyer listed on the deed and Scott McFadden of Denver-based Prospect Real Estate is a developer on the project. Site plans show eight buildings running north and south along the block between Conejos Place and 16th Avenue.

Sprocket Design-Build designed the row homes, which will feature two-car garages and rooftop decks. Groundbreaking is slated for mid-May and the first townhomes should be finished in about a year.

Deviree Vallejo and Liz Richards of Kentwood City Properties are listing the homes at Perry Row. For now, Perry Row’s townhomes are the only for-sale residences available at the former St. Anthony’s site.

Richards said there is a waiting list of 15 interested buyers for the 14 townhomes they have so far released for sale.

“What kind of separates this from other products out there is that we’re creating a new neighborhood,” Richards said. “The Sloan’s district and the St. Anthony’s redevelopment will kind of be a mini Cherry Creek meets South Gaylord Street.”

Richards added that they plan to roll out a second batch of 14 townhomes for sale in May. So far, the homes have been particularly attractive to older but active buyers that want to stay around the urban center.

“We’re seeing more empty nesters just because I feel like they don’t have a lot of options in the city,” Richards said. “If they can’t do Cherry Creek and spend over a million dollars, they’re left to figure it out, and LoHi and some of the other neighborhoods tend to be too urban or edgy or young for them.”

Trammell Crow Residential is building a 369-unit apartment complex spanning two blocks between Stuart and Quitman streets. NAVA Real Estate Development is planning a 12-story condominium tower at Stuart and 17th streets, but has yet to close on the land deal for that site.

Presidio Sloans’ land purchase also marks a halfway point of sorts for EFG at St. Anthony’s. Of the seven blocks included in its 20-acre Sloan’s Lake redevelopment, EFG has sold off four to developers with plans to build.