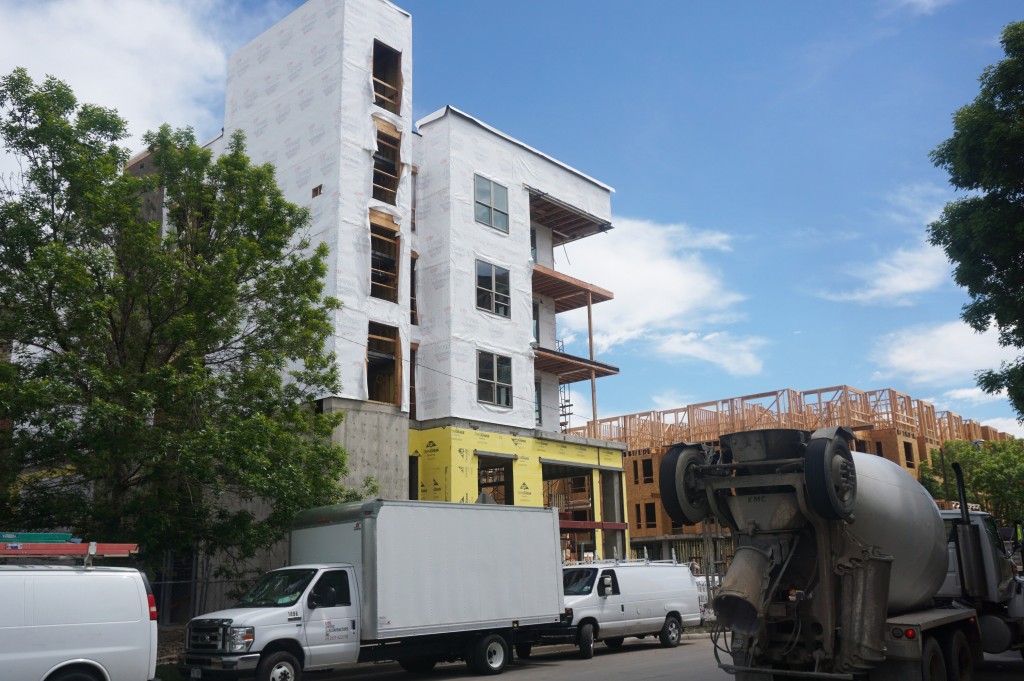 Apartments are taking shape at the St. Anthony’s site. Photo by Burl Rolett.

A theater brand has a $3 million ticket to one of Denver’s biggest redevelopment projects.

Alamo Drafthouse Cinema bought land at the massive St. Anthony’s Hospital redevelopment in Sloan’s Lake this week for $2.9 million. The Austin-based company announced plans to build a new theater last year and will anchor a planned restaurant and retail complex at St. Anthony’s.

Alamo Drafhouse’s new theater will rise on the western half the block bounded by Colfax Avenue, Raleigh Street, Conejos Place and Stuart Street. The Sloan’s Lake theater will be the second Denver-area Alamo Drafthouse Cinema; the company launched a Littleton location in 2013.

The deed for the property was recorded May 26. It’s the latest land deal to fall into place at St. Anthony’s, a redevelopment site spanning seven blocks just south of Sloan’s Lake Park.

Denver-based EnviroFinance Group is the master developer at St. Anthony’s and still owns the bulk of the 20-acre plot. The company has so far sold off chunks to developer Trammell Crow, which has two towers of 369 total apartments under construction at the site.

Littleton Capital Partners bought the eastern half of Block 7, where the Alamo Drafthouse Cinema will be located, from EnviroFinance in March for $1.829 million. A 12-story condo building by NAVA Real Estate Development is also in the works for St. Anthony’s.

Apartments are taking shape at the St. Anthony’s site. Photo by Burl Rolett.