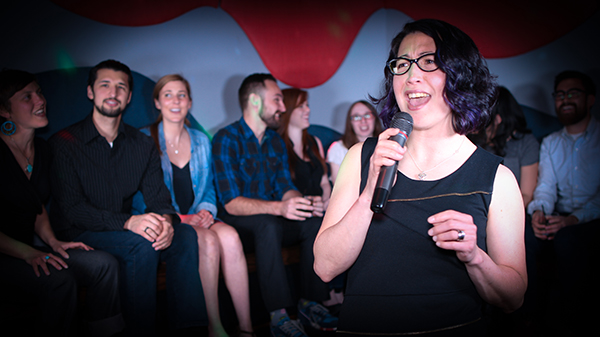 Investors are raising the volume at a karaoke lounge moving into RiNo.

Ahead of opening in July, Portland, Ore.-based Voicebox has raised $300,000 in equity, according to documents filed with the SEC on April 21.

Founder Scott Simon, 38, said he landed on the 4,500-square-foot spot at 26th and Walnut St. in a building owned by Ken Wolf and Ari Stutz of Downtown Property Services. Tyler Bray, a broker with Cushman & Wakefield, helped Simon find the space.

Simon moved to Portland after leaving a job at Cisco Systems in Silicon Valley. He missed the Korean karaoke lounge his friends had frequented in San Francisco, so he decided to build his own version in Oregon, launching the first Voicebox in October 2008.

Customers book a room that can fit as few as eight people and as many as 30. Each suite has two flat-screen TVs, a sound system and seating, Simon said. Groups of about 100 can reserve the bar and open the largest suite to include it.

Pricing varies depending on the size of the party and the suite. Ten to 15 people can rent a room for $80 an hour. The largest suite can cost $145 or more.

“You won’t necessarily know that Voicebox is different from any other nice cocktail bar,” said Simon – that is, until you notice rooms around the bar leading to suites, and a long corridor lined with suites leading to the back of the lounge.

Launching Voicebox in Denver will cost about $1.2 million, Simon said, including $600,000 in construction.

Denver-based LIV Studio is designing the lounge. Contractors employed by Downtown Property Services will do the build out. Simon expects to hire a 15-person staff to work under the guidance of his general manager, who has relocated from Portland to Denver.

Simon said he’s also putting a bigger focus on food at this location than he did in Portland.

He’s hired Jensen Cummings of Fortune Cookie Concepts to compose the menu, which will include lots of skewers and shareable dishes guests can eat without getting their hands dirty. And the lounge will include a full kitchen.

While Simon sniffs out locations in other cities, he’s expanding Voicebox by letting other karaoke companies license the software it created to let guests cue up a playlist from their smartphone’s browser.