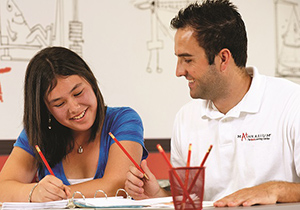 Bernard Douthit likes to run his business by the numbers.

Douthit, 49, who owns the Denver franchise rights for Mathnasium, an after-school tutoring center, is relocating one of them from Greenwood Village to a spot adjacent to Cherry Hills Village this month, hoping to add more clients.

“We were coming to the end of our lease (in Greenwood Village) and we have quite a few families that that live north of there,” Douthit said. “In addition, it’s close to a few schools, in particular Thomas Jefferson High School.”

He also said moving will avoid traffic-congestion problems near the current location at Arapahoe Road and I-25.

Douthit said classes will start April 18 at the new location. The Mathnasium emphasizes one-on-one tutoring, with one instructor for every two or three students.

He’s paying about $20 per square foot on the property, located at 5011 Happy Canyon Road in a shopping plaza the includes CorePower Yoga and Duffy Roll Café. He’s invested about $15,000 in the move, which includes moving fees and construction, he said.

At 900 square feet, it’s about three-quarters the size of his former digs, a 1,200-square-foot location at 6787 S. Clinton St. But Douthit said having less space won’t affect him negatively.

“I think a lot of the space at our old space was unused,” he said. “This may be smaller, but I like it more because the location is much better.”

Douthit thinks moving will double his client base, from about 50 students to 100 within six months.

Douthit opened his first Mathnasium location in Cherry Creek in 2011 and launched Greenwood Village the next year. The Stapleton resident worked for TriZetto, the DTC-based IT company, before purchasing his Mathnasium franchise.

Douthit, 49, who owns the Denver franchise rights for Mathnasium, an after-school tutoring center, is relocating one of them from Greenwood Village to a spot adjacent to Cherry Hills Village this month, hoping to add more clients.