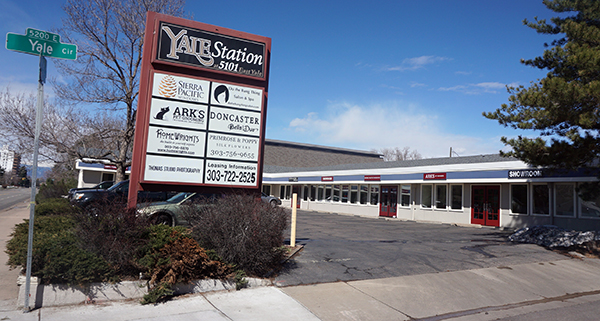 The current retail center at 5101 Yale Circle will be replaced by an apartment building. Photo by Burl Rolett.

Fresh off an eight-figure apartment sale, a longstanding Denver real estate firm isn’t taking any time off from multifamily construction.

“It’s exciting because it’s literally less than a 100-yard walk to the light rail,” Perlmutter said. “It’s on Yale Circle, so it’s really isolated from the highway, but it circles right back to the rail stop.”

The company will build on a 30,000-square-foot plot at the northeast corner of Yale Avenue and Yale Circle. It bought the land this week for $2.5 million, which figures to about $83 per square foot.

Perlmutter & Co. will replace it with 112 apartments. The property is zoned for up to five stories, and Perlmutter estimated his new building will take about 17 months to build. That would make the opening date in late 2017 or early 2018.

Perlmutter said rental rates will come in at slightly more than $2 per square foot. He’s guessing the complex will appeal to professionals, and said it’s well-situated to hit job centers downtown as well as to the south at the Tech Center.

“We think it caters to millennials, and a lot of people that are interested in riding the line,” he said. “We anticipate a lot of weekend warriors, where they’re not driving their car during the week but need them during the weekends.”

The complex also will include a cyber café, fitness center, pool table lounge and a rooftop deck, Perlmutter said.

Jordon Perlmutter & Co. is set to break ground on Yale Street Station as it exits another metro Denver apartment project. The company sold Arterra Place in Aurora earlier this month. Perlmutter finished construction on that 200-unit complex last year and sold it for $46.1 million.

The company also is partnered with Hines and JP Morgan on 1601 Wewatta, a new office building in Union Station whose tenants include law firm Hogan Lovells and the Colorado Athletic Club.

The current retail center at 5101 Yale Circle will be replaced by an apartment building. Photo by Burl Rolett.

Fresh off an eight-figure apartment sale, a longstanding Denver real estate firm isn’t taking any time off from multifamily construction.

Any chance there will be commercial units on the first floor? We need some excitement in that area beyond residential