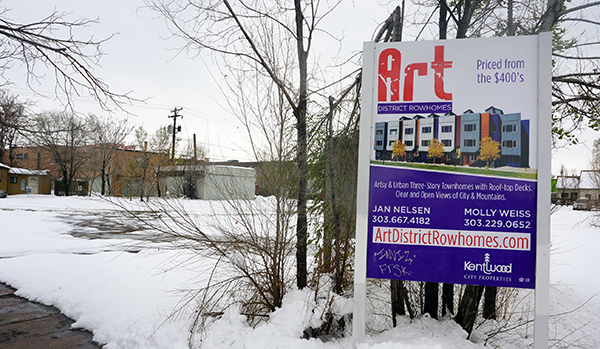 Witkin Properties will build 34 townhomes a block off of Santa Fe Drive at 9th Avenue. Photo by Burl Rolett.

Witkin Properties is close to breaking ground on 34 townhomes a block off of Santa Fe Drive at 9th Avenue and Kalamath Street. Howard Witkin, a longtime suburban developer, is turning his attention to the urban core after building another 15 townhomes at Glenarm Place and Park Avenue West in 2014.

“We think it’s a similar market to what we had over in Five Points with people working downtown that want to work and live close by,” Witkin said. “They like the idea of being able to walk to grocery stores and entertainment, and there are a lot of neat things happening in the Santa Fe Art District.”

Witkin bought a one acre plot at the corner of 9th and Kalamath this week for $2.4 million and will call it the Art District Santa Fe Rowhomes. His plan is to build 28 for-sale townhomes and keep six more to rent. The project will cost between $10 million and $12 million, he said.

Witkin said he’s sold about 17 of the 28 available townhomes, with most of the buyers working downtown, and at least one working at the Auraria campus.

“We think there’s a need for affordable housing, or I guess we should now call it ‘moderately priced housing,’” Witkin said. “The buyers that are coming in are not looking for the big square footages; they want something more practical.”

Witkin also hopes to capitalize on the nearby Auraria campus on the rental side. The for-rent units are the biggest ones in the rowhome complex, and he said three or four students could save money by living off campus and renting there.

Witkin plans to have the complex move-in ready in about a year. Sean Tennant and Gabi Witkin are the architects. Centennial Bank is financing the development. Kentwood City Realtors Jan Nelsen and Molly Weiss are selling the townhomes.

With projects in Five Points and Santa Fe nearing the finish line, Witkin said he’s going to keep working on deals near downtown Denver, which is a change in strategy from what’s he’s done in the past.

“I used to build a three-bed, two-bath home with a yard and a white picket fence around it in the suburbs for years,” Witkin said. “And that’s what everyone wanted, but there’s been a change over the last three years.”

Witkin Properties will build 34 townhomes a block off of Santa Fe Drive at 9th Avenue. Photo by Burl Rolett.

This is sad, indeed. Howard Witkins vile townhome development at Park Avenue West and Glenarm is an offense to the eye and to the public realm. Whitkin is attracted to the urban core since, he has realized, there’s greater profit due to our increasing interest in living in walkable communities like Five Points and Santa Fe Drive. What Witkin sucks out of the neighborhood as a parasitic developer he fails to replace with good urban design. It’s an imbalance in the compact that good developers have with the communities in which they develop. Good developers like Paul Tamburello and Susan Powers seem to think first about how their projects fit in to the neighborhood. Howard’s are focused on his financial profit, not the neighborhood’s benefit. Watch out, Santa Fe.

And at $300/sqft is not moderately priced at all!

We’ve met with Howard and his team and expressed our concerns and desires to use better materials and facades and streetscaping. Of course we don’t control what he does, but so far he has seemed receptive and realizes that this is an art district and that we need something far superior to what was built in Five Points. Also, note to editor: our name, we are “Denver’s Art District on Santa Fe,” since 2003.