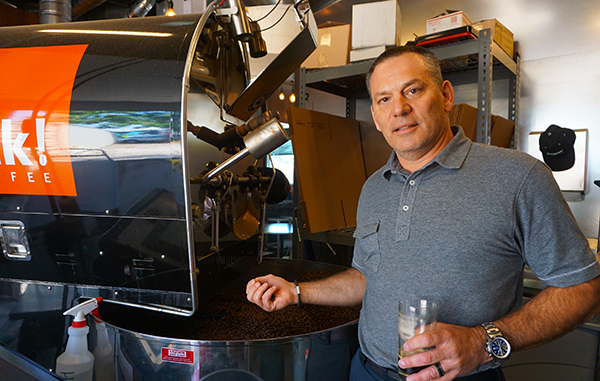 To grow his chain of coffee shops, Keith Herbert is thinking outside the retail box.

Herbert, who owns RiNo-based Ink! Coffee, is opening three more cafes in Denver – including a 200-square-foot outpost in a gym, a pair of food carts at a hospital and the chain’s biggest outpost.

“We probably want to have another 10 stores over the next three years,” Herbert said. “I know we can do 25 stores and still make the city’s best coffee in the shortest amount of time. That’s the goal.”

Herbert kicked off his campaign with that 200-square-foot café in the Cherry Creek Athletic Club, which opened the first week of March. While the shop is small, it opens into the club’s newly renovated lobby, providing extra seating.

“There’s not much going on in Glendale as far as coffee goes, so we’re filling a hole in the market there,” Herbert said. “We also sell a bunch of healthy drinks like smoothies, so it’ll complement the clientele of the athletic club pretty well.”

Herbert plans to open a spot at National Jewish Health in April. He’s running the café out of two mobile carts, harkening back to Ink!’s humble beginnings as a coffee cart in Aspen in 1994. The carts will have a reduced menu compared to Ink!’s larger storefronts, nixing foods such as sandwiches and salads.

“What we try to do is open kiosks or smaller stores to offset our larger, high-profile, branding-type stores like what we have on Larimer Street. It’s a way to stretch our cash flow and expand our footprint while keeping capital investment low,” Herbert said, adding that building an Ink! café can run about $500,000, while kiosks cost around $100,000.

Herbert aims to open his third store of 2016 this summer. At 3,000 square feet, the suburban shop will be the largest Ink! café, Herbert said. That shop is located in the Denver Highlands, a 365,000-square-foot office campus located at 10065 E. Harvard Ave. near Cherry Creek Golf Club. It was an attractive location, Herbert said, because 1,500 people will work in the building. The region is also a coffee desert, Herbert said.

Herbert said once the three shops are running, he’ll focus on canning Ink!’s cold brew coffee to sell in cafes and at other retailers.

“It’s a big project so we’re going to get the stores ready first,” Herbert said. “But once we nail it down and see how it’s received, it definitely could go national.”

RiNo-based Ink! Coffee is opening three more cafes in Denver -- including a 200-square-foot outpost in a gym, a pair of food carts at a hospital and the chain’s biggest outpost, near DTC.