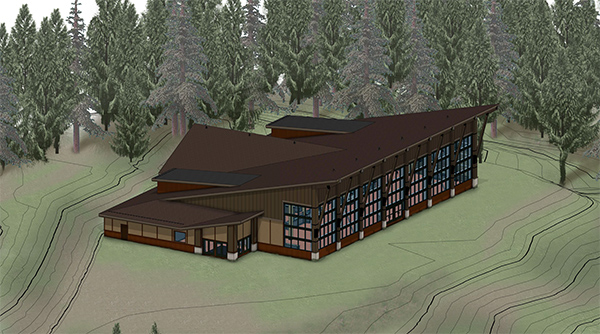 Skiers and snowboarders soon will have a new dining option at 11,000 feet.

Vail Resorts announced it will build a 490-seat food court-style restaurant at the top of Breckenridge’s Peak 7 in its quarterly report, which the company filed with the SEC yesterday.

John Buhler, Breckenridge’s COO, said the restaurant will bridge the gap between hungry skiers on the resort’s Peak 6, which opened three years ago, and the nearest restaurant on Peak 8.

“Right now, if you’re on Peak 6, which is over 500 acres in size, you have to ski to Peak 8 for lunch,” Buhler said. “When we opened (Peak 6), we weren’t able to put a restaurant on it because of our agreement with the Forest Service. But we do have the ability to put one on Peak 7.”

It takes skiers on Peak 6 about 25 minutes to reach the nearest restaurant, located at the base of Peak 7, Buhler said. The new restaurant, which will be styled as a fast-casual food court, will reduce that by about 10 minutes.

The menu will include typical on-mountain cuisine such as burgers and pizza, along with more exotic eats such as Mediterranean food, Buhler said. It’ll also feature the only salad bar at Breckenridge. While salads are available at other on-mountain restaurants, they’re prepackaged in plastic containers.

And of course, the new ski stop will have a bar.

The new establishment will be the fourth on-mountain restaurant at Breckenridge, Buhler said. It will increase the mountain’s restaurant seating capacity by 25 percent.

Vail will break ground on the project this May and hopes to open the restaurant by December, Buhler said. The majority of construction will take place during the summer, when contractors can use maintenance roads that snow covers during the ski season.

It will be much easier getting materials to the restaurant site than it was hauling construction gear to build the lift at the top of Peak 6, Buhler said. Helicopters flew in materials for that chore.

Nevada-based Collaborative Design Studio is the project architect. Buhler declined to comment on its cost.

Vail Resorts plans other improvements. According to SEC documents, the Vail ski resort will get an upgrade on its Chair 17 lift, which runs to the top of Sun Up Bowl. Vail Resorts also plans to renovate Beaver Creek’s Pines Lodge, rework its website’s design and perform other back-end software upgrades.

Outside of Colorado, Vail plans $13 million in renovations to Wilmot Mountain, a Wisconsin ski hill it bought this year for $12 million.

The company expects to spend $100 million on new projects in 2016, according to documents. It will finance the projects with cash on hand, a line of credit and future cash flow.