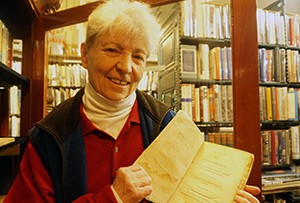 Sue Gallagher, who founded Gallagher Books with her late husband, Don, in 1994, is relocating her shop less than a block down Broadway to get relief from rising rents.

The Gallaghers founded their business at the former Antique Guild at the corner of Louisiana Avenue and Broadway. That property now houses a row of restaurants, including Maria Empanada.

Gallagher stocks about 18,000 books, some dating to the 1700s, Gallagher said. The shop specializes in literature on topics such as the American West, railroads and art history, Gallagher said.

She has marked down many of her books between 15 and 50 percent, hoping to clear out about 25 percent of inventory before moving.

Gallagher founded the business before the Internet was ubiquitous and researching titles could be as easy as typing them into Google. Instead, she relied on two reference books to determine the value of her books based on factors such as their rarity and publishing date.

But by 2001, Gallagher was using the Internet, albeit for a different purpose: online sales. Back then, her Internet sales accounted for about 15 percent of revenue; today, that’s reached  nearly 50 percent, Gallagher said.

She doesn’t view technology such as e-books or audiobooks as a threat to her business, she said, because only about 25 percent of her inventory would appear in those formats.

“Right now the baby boomers are downsizing and moving to places like Florida or Arizona, or where the grandkids are,” she said. “They’ve bought or inherited a bunch of books and they really want to get rid of them, and they come in hoping that they’re valuable.”

Usually they’re not. Gallagher said she rarely purchases more than 50 of the 3,000 books she looks at every week. She also encourages sellers to post their books on sites such as eBay or gift them to relatives.

“This is a business that you never need to retire from,” she said. “I don’t know what I’d do if I ever stopped. I wasn’t made to sit around a swimming pool eating Bon Bons and drinking lattes. I can do this as long as I have someone who carries the boxes.”