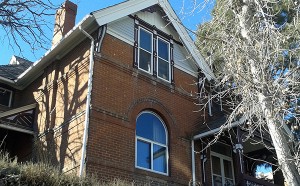 One of the homes that will be scraped.

A new developer has stepped in on a controversial Jefferson Park townhome project.

Dublin Development bought an half acre on Eliot Street last week to build 18 new townhomes. It’s the same site that sparked controversy last year when preservationists sought a historic designation for one of the site’s homes to block a project planned by Adams Development.

Jae Edwards, Dublin Development principal, followed those developments, but had no intention of having a stake in the final project.

“We were asked to testify because we were friends with Nathan Adams … and we attended the landmark preservation hearing, and the City Council meeting,” Edwards said, “But we did it not having any idea that we would end up building the project.”

Edwards’ firm bought the 0.44-acre plot for $2.26 million. The site encompasses three parcels on Eliot Street between 23rd and 24th avenues. Edwards said Eliot Hill, as the project is called, will cost about $4 million to develop.

The site comes fully entitled and ready to build, Edwards said, but that wasn’t a simple task for the previous developer. Adams Development, run by Nathan Adams, took the project through a historic designation battle that culminated in a three-hour public hearing at a City Council meeting over a 135-year-old home on the site.

A preservationist group submitted an application to place a historic designation on the house that would have blocked the development. The attempt came without the consent of the home’s owner, who already had agreed to sell his property to Adams.

Denver’s Landmark Preservation Commission voted 6-1 in favor of the petition. But the City Council went against that recommendation in a November meeting, voting 7-4 to reject the landmark bid and allow the development.

Edwards said after that, Adams approached him about buying the plot – with a fully approved development plan – earlier this year.

“It was never really on our radar until about six weeks ago,” Edwards said. “Nathan decided to sell and we were ready for our next project.”

Plans show two rows of nine townhomes, each split into a duplex, triplex and fourplex. Each unit faces a common middle courtyard with garages loading off of an alley. The homes will be three stories tall with a fourth-floor roof deck.

Townhomes will measure about 1,275 square feet apiece. Edwards said his two-bedroom homes will be smaller than most others, but he expects that to be to Dublin’s advantage. He said they’ll be priced at $380 per square foot, which comes to about $485,000.

“We love that we’re able to stay under the $500,000 price point per unit,” he said. “That’s really an anomaly in Jefferson Park at the moment.”

Real Architecture is the architect on the project, and Cornerstone Denver Design Build is the general contractor. Edwards is financing the deal with a loan from Bank of Colorado.

Jefferson Park continues to generate new development. Dublin has at least four other projects in different stages of development in the neighborhood. Edwards hopes Eliot Hill will stand out for its location between the park and neighborhood hangouts.

“We’re a half-block from Jefferson Park itself,” Edwards said. “And then we’re about a block from a commercial corner with amenities like Sarto’s, Jefferson Park Pub and everything at 25th and Eliot.”

One of the homes that will be scraped.

“The Denver Post failed to mention that Jim the homeowner was paid $1.0 Million by Nathan Adams Development. Shortly after acquisition, Mr. Adams sold the 3 parcels to his office mate for $2.26 Million. Adams purchased the property 50% below market value. So how was the price set ? Jim the roofer received a phone call from Adams’ people and asked if he was interested in selling, “Ya he said, for a million dollars.” The contract to sell apparently was immediate before any other real estate professionals could make offers in an open market.”
“Much is made about property rights. What about Jim’s property rights ? He got ripped off for a Million Dollars by unethical, unscrupulous developers and Denver lost an historic landmark. Thank you, City Council for disregarding the decision of your experts in the Land Mark Preservation Commission and refusing to hear the facts on this real estate deal.”