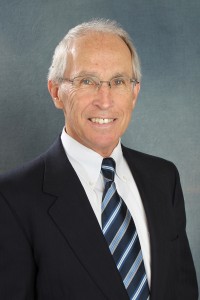 Two lawyers with the same last name – and no relation – are in court to decide who has rights to use the surname in the title of his law firm.

Arvada-based The Gilbert Law Group sued Centennial’s The Gilbert Law Firm in U.S. District Court for Colorado this week, alleging that the latter’s name is confusing clients and courts.

“I’ve worked hard to build up a reputation locally and nationally,” James Gilbert said. “When someone starts to create confusion with people who want to use your services, you can’t allow that to happen. We’ve had at least three separate instances where consumers were confused about those similarities.”

But Christopher Gilbert claims he’s in the clear.

“My understanding is that someone’s surname plus a generic phrase, such as law firm, is a completely proper way to conduct business,” he said. “I incorporated in the state of Colorado and the state accepted the incorporation documents rather than determine that (the names were) confusingly similar.”

Christopher rejected all of them, according to the suit, and filed the name Gilbert Law Firm as a new business with the secretary of state on June 29. 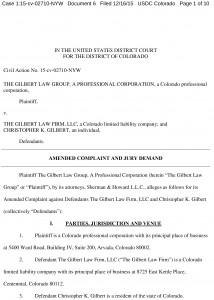 The similar sound of the firms also befuddled the software of business networking site LinkedIn. When Christopher Gilbert added the Gilbert Law Firm on LinkedIn, the website automatically assigned the page with the Gilbert Law Group’s logo, according to the suit.

Christopher said he doesn’t think the names are confusing, however, given that the Gilbert Law Group has a very specific clientele.

Christopher practices personal injury law and product liability as well, he said, but his area of expertise involves pharmaceutical companies. To date, he’s represented clients against some of the industry’s heavy-hitters, including Bayer and General Electric, he said.

The 45-year-old previously worked for his own firm in Texas called the Gilbert Law Firm from 2003 through 2010, according to his LinkedIn profile, and graduated from the Mississippi College School of Law in 1998.

James Gilbert, 73, has represented clients against automotive companies like Johnson Controls, which manufactured defective car seats that resulted in a $43 million settlement, the largest ever awarded in Vermont State Court, according to the Gilbert Law Group’s website.

The Colorado native received his J.D. from New York University School of Law.