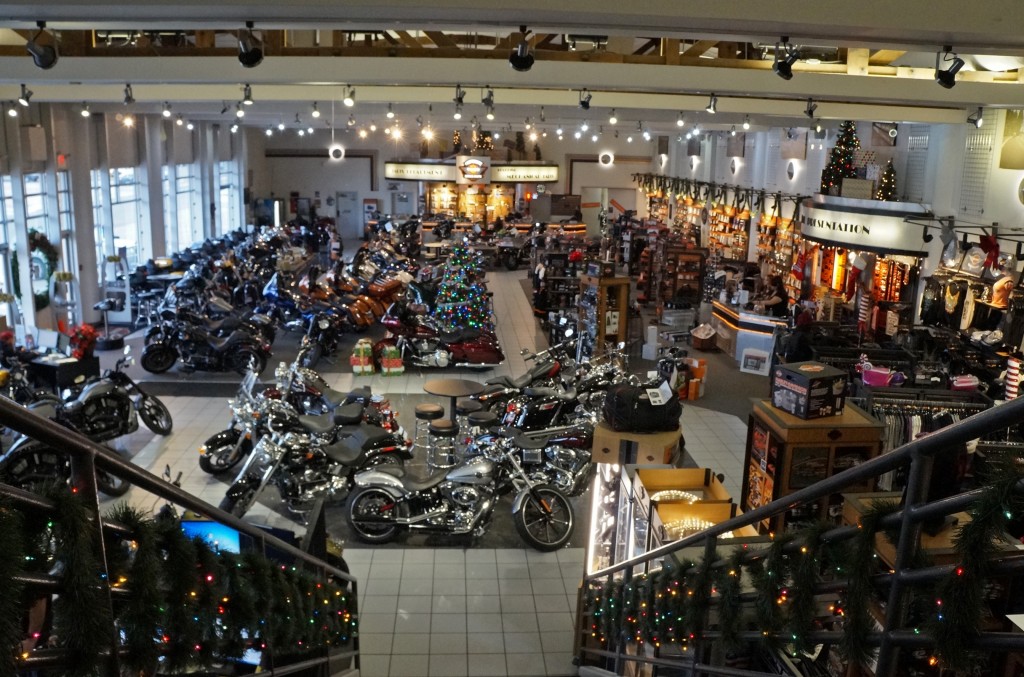 Avalanche Harley-Davidson plans to more than double its current space in a new building. Photos by Amy DiPierro.

Urban gridlock is no place for a Harley.

With 30 years on West Colfax under its belt, Avalanche Harley-Davidson in Lakewood is gunning for a new spot 10 miles south with more land and the potential for a building twice as big.

General Manager Ryan Sherman said the business has doubled annual motorcycle sales since 2012, thanks to an aggressive advertising strategy more akin to a large car dealership than to other Harley dealers.

But Sherman said his line of work couldn’t be more different from a car dealer’s job. 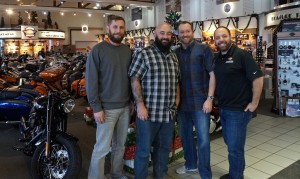 Avalanche is under contract to purchase 6 acres on the southwest corner of West Alameda Parkway and Colorado 470 near Dinosaur Ridge, he said, in a new development that doesn’t even have an address yet.

“We looked at several existing properties and decided this was best for us,” he said. “Being off of C-470 versus being on Colfax – it’s significantly easier access.”

Avalanche will leave in the rearview mirror a stretch of West Colfax that has been Harley country since 1984, when Freedom Harley-Davidson rolled into an old movie theater. Hints of the space’s theatrical past include a light-up marquee fronting Colfax.

Michael Veracka, a partner in six Harley dealerships in the U.S., took over the shop in 2012 and renamed it Avalanche. That title will travel with it to the new location, Sherman said.

These days, the neighborhood is bumper-to-bumper dealerships and repair shops. A Mazda dealer faces Avalanche across West Colfax and G-Force PowerSports is a few blocks down the street. 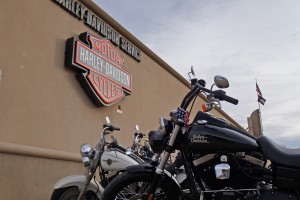 The dealership plans to close out the year with 1,600 bikes sold.

But the mini Motor City isn’t big enough for Harley anymore. Sherman expects to sell 1,600 bikes by year end – up from 1,300 in 2014 and 800 in 2012 – and since Harley-Davidson asks its shops to maintain a minimum square footage to sales ratio, Avalanche is just about maxed out.

Construction should start this February with a tentative grand opening in a year’s time, Sherman said. He said Avalanche has hired a general contractor but hasn’t taken out a bank loan to finance construction. The current location on Colfax will go up for sale, he said.

Currently, there are six Harley-Davidson locations in the Denver metro area. Three of them make up Mile High Harley, a dealership which has shops in Aurora, Parker and at DIA.

Avalanche Harley-Davidson plans to more than double its current space in a new building. Photos by Amy DiPierro.

I am devastated by this news. This is not the highest and best use of this land, nor good for surrounding neighborhoods and areas. Lakewood is home to some of the most active residents, cyclists, hikers of which will all be affected by this. Further, this is a geographically historical site with Dinosaur Ridge. As a Lakewood resident now and for nearly all of my life, I hope Jefferson County will not approve this rezoning. If you read this and are also opposed, please send an opposition to Jefferson County Senior Planner: Heather Gutherless at hgutherl@co.jefferson.co.us

Solterra and neighboring communities are fighting the rezoning of this land to allow such a catastrophic building to be placed adjacent a beautiful community and open space rather than the proper neighborhood ice cream or pizza shop all the residents of Solterra were promised when purchasing their homes. You can be sure this rezoning will be placed on hold for some time while it is tied up in the approval process or litigation. Stay out of our neighborhood!

This article reports on an aspiration of the dealership. In order for the to be “under contract”, the County would have to have received a formal rezoning application for any parcels at the C-470 and Alameda intersection. No such application is on file. Any parcel in that area would need to go through a rezoning and site development plan process, which is heavily disfavored by the Solterra neighborhood across C470 – sighting noise problems from test drives up Alameda, and the desire for the zoning to remain as it is. Those approval processes typically takes 4-6 months for the rezoning and 3-4 months for the site development plan. There is public notice of each of these processes and public testimony taken at a public hearings for rezoning cases. This means the Harley dealership faces a fierce fight to get the zoning changed. There is no mention of any of this in your article, and I believe the negative view of many residents of new high-end homes at Solterra ought to be reflected in an updated article – as these omissions are highly misleading and the rezoning is by no means a done deal.

This is not an accurate article. The parcel of land has not been re-zoned and the Solterra neighborhood plans to fight the re-zoning. This will take 6-8 months and guarantees there will be a fight. The community is in favor of shopping and eating establishments to advance the value of the Solterra real estate.