CorePower is stretching its corporate muscles with a new office building. Photos courtesy of CorePower.

Denver’s largest yoga chain is rolling up its office yoga mats at its Highlands headquarters and settling back down in a new space in RiNo.

CorePower Yoga, which has 136 locations around the country, will double the size of its corporate offices next month when it moves to a building under construction at RiNo’s Industry.

“We should be moving in over the holiday season, so we should be fully operational in January,” said Jeff Gaul, CorePower’s chief development officer.

At 23,500 square feet, the new two-story office will be more than double the size of CorePower’s current 11,000-square-foot office space at 3041 Zuni St., where it will continue to operate a yoga studio. Gaul said the company signed a 10-year lease on the new location.

Expansion to the larger office was necessary to house the company’s growing staff – currently hovering around 100, Gaul said. 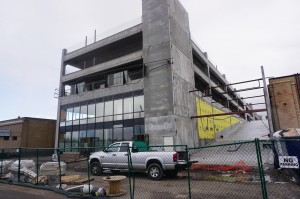 Construction is underway on the new building in Industry. Photo by George Demopoulos.

The Industry spot will include a 3,500-square-foot yoga studio, Gaul said.

“It’ll be an upscale environment with a small retail component, as well,” Gaul said. “We think the RiNo neighborhood is lacking yoga right now. With the growth of that neighborhood, we know (the studio) will be a huge success.”

CorePower will keep its Highlands studio, Gual said, and sublease its office space there to a local marketing firm; he wouldn’t specify which company will be moving in.

In addition to the new office and Denver studio, CorePower will open another 11 studios before the end of 2015, Gaul said. That adds up to a total of 25 new CorePower locations that have opened this year.

But there are even bigger plans for 2016 – Gaul said that the company will open 35 studios in Southern California, the Midwest and the Northeast next year.

Telluride native Trevor Tice founded CorePower in 2002 with the capital he raised from selling his previous company, IT outsourcing firm Tech Partners International. Since then, the chain has grown to operate 136 studios nationwide.

The company received a sizable investment from private equity firm Catterton Partners in 2013, which Tice described as “north of 100 million.”

CorePower is stretching its corporate muscles with a new office building. Photos courtesy of CorePower.

With dozens more studios popping up across the country, the yoga giant is strengthening its corporate space in a leap from the Highlands to RiNo.