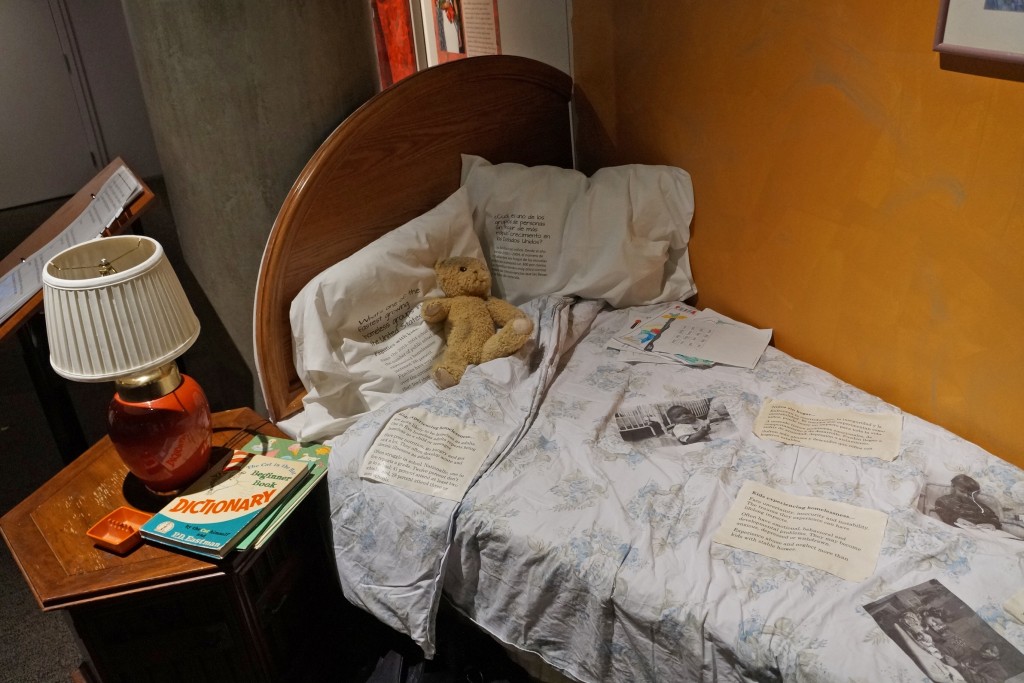 The History Colorado Center is telling stories of the state’s homeless in a new exhibit. Photos by Amy DiPierro.

The History Colorado Center is taking stories of homelessness off the streets and housing them under its roof.

“Searching for Home” prompts visitors to learn about the history of homelessness in Colorado from the Gold Rush through the present. It opened last week.

The idea for the exhibit started when History Colorado staffers working on another exhibit discovered they had plenty of fancy dresses and artifacts from the 1930s in their collection, but no stories about the hardest-hit people during the Dust Bowl. 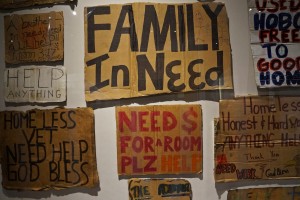 A museum curator collected signs from homeless people in the city for the display.

That revelation about the past prompted a new question for the present, said Alison Salutz, one of the staff members behind Searching for Home.

“If we failed to collect things then, is there anything we’re failing to collect now?” she said.

James Peterson, assistant curator for artifacts, was passing homeless folks at the Occupy Denver encampment outside the Capitol regularly.

“I walked past them every day knowing that if the perfect storm hit, I, like so many of us who live from paycheck to paycheck, could easily be on the streets myself,” he wrote in an email to BusinessDen.

The feeling stuck with him for two years. So eventually, Peterson started talking to the homeless people he passed on the streets. From January 2014 through September 2014, he interviewed and photographed 47 people, even purchasing some of their cardboard signs for the museum collection. 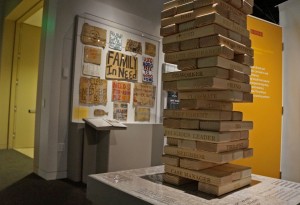 Museum visitors can pull out pieces from a Jenga-like puzzle, in which each block represents something that helps prevent homelessness.

Peterson’s collection gradually morphed into the exhibit, which is now peppered with the stories, pictures and signs he and interviewers from Colorado Coalition for the Homeless, Impact Denver and The Burnes Institute amassed. Some are tucked into a photo album, while others are stitched into ragged bedspreads or written on paper and wrapped around food pantry groceries.

History Colorado collected $48,000 in donations to fund the exhibit, the nonprofit said. It does not have a firm closing date, but Peterson estimated it will stay open for the next seven to nine months.

Salutz said the exhibition demonstrates how homelessness has been a recurring problem for Colorado during economic busts, dating as far back as unlucky Gold Rush miners unable to afford housing during the late 1800s.

“They found solutions, like sleeping in tents, or bunk homes or bars,” Salutz said.

To tell the story of mining boom and bust, the center discovered an artifact belonging to one of the state’s most mythologized rags-to-riches-to-rags figures, hidden in its own permanent collection.

But now, for the first time, the center is displaying the evidence of Baby Doe’s fall from grace: a humble pair of flannel long johns she wore after her family lost their fortune during the Panic of 1893.

The History Colorado Center is telling stories of the state’s homeless in a new exhibit. Photos by Amy DiPierro.

Hello,
Will the museum welcome the homeless of Denver to come and see their story? the admissions fee would probably shut most homeless people out of the show.

Those of us with a conscience need to picket this exhibit with our signs and banners urging city council to repeal the Urban Camping Ban. We have some live homeless people who could come as artifacts of themselves plus well worn signs saying, “Homelessness is not a crime”, “Homes Not Handcuffs” and “People over Profit.” We are still feeding homeless people every Friday and fighting for our right to expose this unconstitutional ban despite frequent arrests, intimidation, theft of all belongings from the homeless who have camped with us and the long term jailing of one of our vocal protestors. We just delivered 13,600 petition signatures to city council demanding a repeal of the ban just after the Tiny Homes were destroyed and our colleagues arrested. We will not let a historic exhibit overshadow the truth of life in hell for Denver’s homeless citizens today and the refusal of our city council to address the issue.

Hi Laura, I urge you to check out this exhibit yourself before making decisions about its content. Not only were people experiencing homelessness an integral part of the development of the exhibit, but it also tells a combination of historic and contemporary stories. I think you’ll find a surprising amount of the very content and artifacts you are looking for are indeed a part of the exhibit.