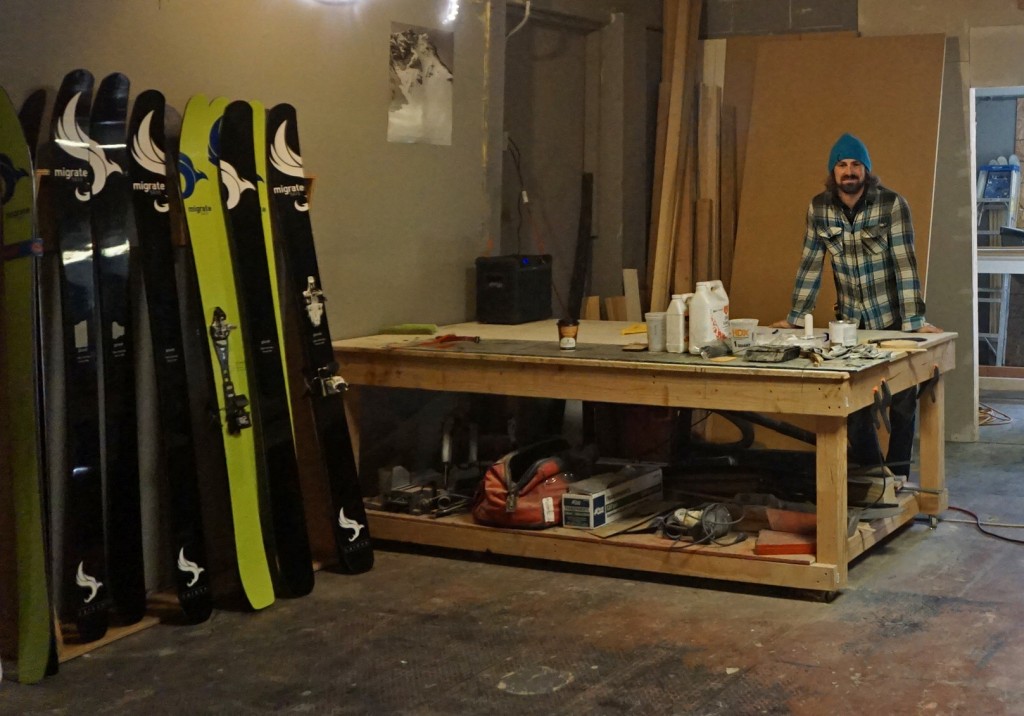 Brendan Lawrence may be a ski bum – but that’s not why he lived out of his van for a year.

Lawrence was pinching pennies to fund Migrate Skis, a ski startup that specializes in carbon fiber. Lawrence sold his first pair of skis in August.

“Everything I have goes into this,” he said. “Here I am with this ski company selling $1,200 skis, but my gloves have holes all the way through them. The skins on my skis wouldn’t stick to glue. My boots are all snapped. I just look like this guy who’s in shambles half the time – everything goes into this.”

While the rest of Denver is paying $1,000 for a 500-square-foot apartment, Lawrence is paying $500 per month to rent a 1,000-square-foot workshop in Wheat Ridge. A few months ago, he moved into an apartment in Arvada. But for a year, Lawrence said he slept in the back of his van with his dog, Pepper. He showered at the gym in the mornings.

But living in a van can have its perks, he said. 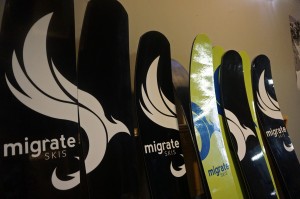 “When I met my girlfriend, she was traveling across the country in her Jeep and sleeping in a tent, so we had something in common,” he said. “I was going to the gym every day, too.”

A carpenter by day, Lawrence founded Migrate in 2011 as a way to break into the ski industry. He’d considered a career in retail or as a ski instructor, but after Googling how to make skis, he decided to try his hand at it.

So he built his own ski press in his Golden apartment and started churning out skis.

“I built my first pair of skis, and they were terrible,” he said. “I built my second and they were still terrible. But it kind of became an addiction – sitting there trying to figure out how to make good skis.”

His persistence has yielded three models of skis over the last four years: the Plunge, a big-mountain charger; the Pivvit, a twin-tipped rocker for maximum control; and the traditionally cambered Tempter. He’s got another two designs in the works, he said, that he hopes to perfect by the end of the season.

Lawrence said Migrate skis are made as light and durable as possible with an aggressive skier in mind. He uses carbon fiber, a stronger and more durable material than traditional fiberglass.

“Making light skis has always been a goal, but at the same time you don’t want floppy noodles,” he said. “You want something that can take big drops and still hold your edge.” 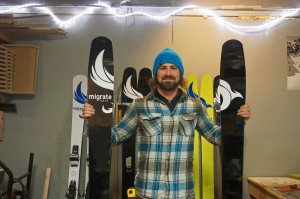 Lawrence is working up more designs and hopes to get his skis in more shops this season.

The skis cost $1,200 for all three models and are available online and in the Jagged Edge ski shop in Telluride.

Lawrence has marketed exclusively through word-of-mouth and social media and has begun attending trade shows like the Colorado Ski and Snowboard Expo.

“That was the most exposure I’ve ever had,” he said, referring to the expo. “Last weekend generated 100 times more interest than anything else I’ve done.”

Lawrence’s efforts are starting to pay off. He sold 12 pairs of skis to Jagged Edge on consignment, and he has been approached by 15 private buyers.

His next step, he said, is to get a six-ski demo fleet in ski shops that he can showcase at local mountains like Loveland. That will help spread awareness of the brand and get potential clients to test the product.

Lawrence said he hopes to make the switch to building skis full-time soon. He would need to sell 50 skis per year to make that fly, he said.

Lawrence, 30, was born outside of Boston and grew up skiing at Wachusett Mountain in Massachusetts and Loon Mountain in New Hampshire. After a brief stint living in Tampa, Florida, from 2007 through 2009, he moved to Morrison to ski.

“As long as I can pay my bills, I’m happy. I’d hate to be an accountant or something,” he said. “I honestly believe that if you just keep at it, you’re going to get it. That’s how it worked with the carbon fiber – it just made sense by accident one day.”

A local ski maker is getting his startup off the ground -- and putting a solid roof over his own head after a year of living in his van to save money.